Eddie Van Halen memorial plaque to be unveiled next week 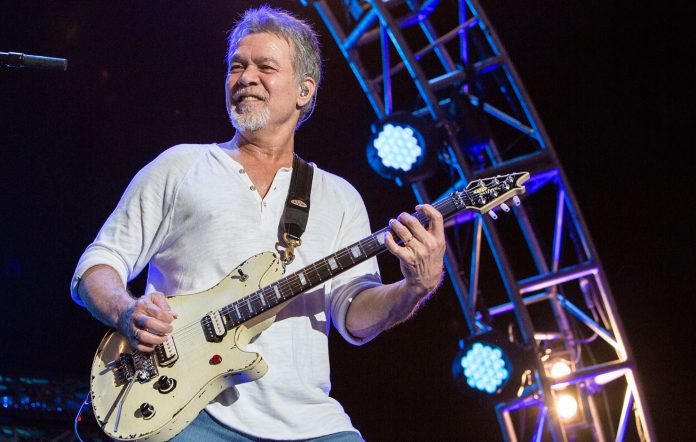 A memorial plaque to Eddie Van Halen is due to be unveiled next week.

Van Halen died from throat cancer on October 6, 2020. Tributes from members of AC/DC, KISS, Muse and Pearl Jam among many others, poured in following news of his passing last year.

Now, according to Pasadena Star-News, a new plaque will be unveiled in his hometown of Pasadena, California, to remember the musician one year after his passing.

On Monday October 11, Pasadena Mayor Victor Gordo and fellow council members will attend the unveiling close to the city’s Convention Center, which is next to the Civic Auditorium.

As reported on Blabbermouth, this is where Van Halen played a number of times between 1975 and 1978. The public cannot attend because of coronavirus restrictions that are still in place.

The tribute was spearheaded by two Pasadena residents, Randa Schmalfeld and Julie Kimura, who set up a GoFundMe page earlier this year to set up a permanent memorial.

In an update on their GoFundMe page last month, the pair saw the memorial will “honour the early days of Van Halen and the importance of their performances at the Pasadena Civic in the 1970’s.

“In addition to a brief description about the Van Halen family and the band, and their relationship to Pasadena, it will also include the infamous Van Halen logo, which the band has approved for display on the plaque.”

Elsewhere, Eddie’s son, Wolfgang, posted an emotional tribute to his father on the first anniversary of his death earlier this week.

In his post on social media, Wolfgang said he was “trying to my best here without [Eddie], but it’s really fucking hard You fought so hard for so long, but you were still taken away,” Wolfgang wrote, “It’s just so unfair.”

“I love you with all of me heart, Pop. Watch over me.”

In addition to being Eddie’s son, Wolfgang was also Van Halen’s bassist since 2006.

The post Eddie Van Halen memorial plaque to be unveiled next week appeared first on NME.