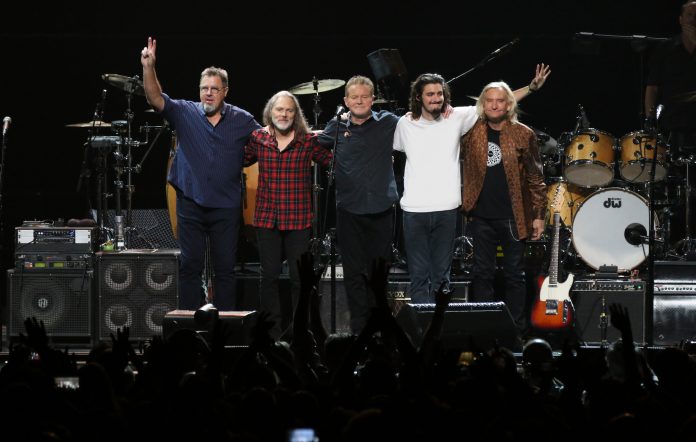 The legendary band are celebrating 50 years in the game, and will play six shows across the UK, Ireland and Europe next June.

The gigs kick off in Arnhem in the Netherlands with a show at the Gelredome on June 17, before they play stadiums in Liverpool, Edinburgh and Dublin.

The tour then wraps up on June 26 with the massive Hyde Park gig, which will feature support from Robert Plant and Alison Krauss, with more TBC.

Tickets for the Hyde Park show go on sale at 9am local time next Friday (November 5) here.

Eagles will join the likes of Elton John, Pearl Jam and Duran Duran at BST Hyde Park 2022, while this week Adele announced her long-awaited live return, playing two shows on July 1 and 2 next year.

Before the COVID pandemic, Eagles had set out plans to return to the UK in the summer of 2021 to bring their ‘Hotel California’ tour to London’s Wembley Stadium for two nights.

The announcement came after the rockers, led by Don Henley, Joe Walsh and Timothy B. Schmit, played the album in its entirety for the first time ever at three sold-out shows in Las Vegas in September of 2019. The show featured 77 musicians on stage, including a 46-piece orchestra and 22-strong choir.

Eagles, alongside Pearl Jam, Guns N’ Roses and Green Day, were among the bands to receive PPP loans from the US federal government’s Paycheck Protection Program during the coronavirus crisis last year.