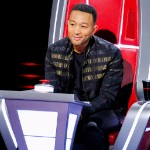 The Voice has reached the Knockout round, and the pressure is well and truly on.

That didn’t stop Team Legend’s Joshua Vacanti and Sabrina Dias from tackling two enormous pop hits, from two of the biggest pop stars on the planet.

Dias went next, hitting “Mega Mentor” Ed Sheeran’s “Photograph.” And like the fire-haired Brit, Dias flexed her musical chops on an acoustic guitar and percussion, for a strong all-round performance.

“What in the world is with your tone,” Clarkson said of Vacanti. “It’s so big, it’s so round.” Clarkson admitted she’s “obsessed” with Dias. “There’s so much artistry to you.” But Vacanti was her fave.

Blake Shelton remarked that Vacanti “swung for the fence” and was on the “verge of breaking down,” in the best possible way.

Ariana Grande loved what she saw and heard, but, if she had the choice she would go with Dias.

In the end, John Legend had to make a call. “It’s so cool to see you both shine on this stage,” he remarked. But there could be only one, and that was Vacanti.

In his followup remarks, Legend paid tribute to his protégé’s “character and power.” The live round awaits.