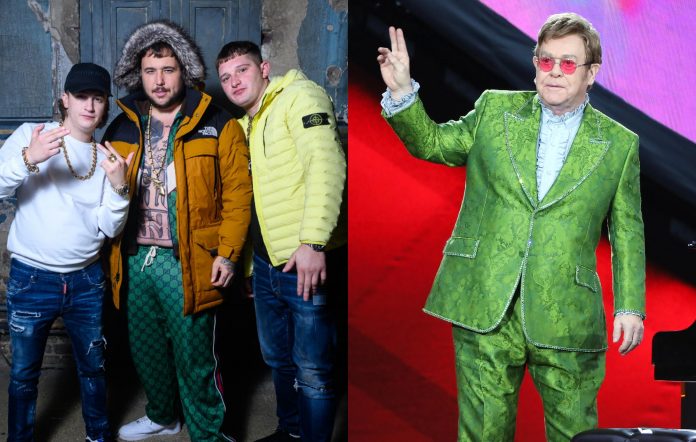 Bad Boy Chiller Crew have said they’d like to collaborate with Elton John for a remixed version of his 1979 hit ‘Are You Ready For Love’.

READ MORE: Bad Boy Chiller Crew – “We’re not a proper boyband. There’s nothing normal about us”

The Bradford group told NME in this week’s Big Read that it’s an ambition of theirs to persuade the pop legend to work with them.

Bad Boy Chiller Crew’s first CD, ‘Git Up Mush’, was handmade and self-released by the boys who sourced copyright-free vocals from online sample library Splice for their songs’ choruses.

“Tell Elton John that if he clears the ‘Are You Ready For Love’ vocals, we’ll remix it,” bandmember Kane Welsh told NME. “We’d collaborate with him and make a proper banger.”

Elsewhere in the interview the comedy troupe and band – completed by Gareth Kelly and Clive (Sam) Robinson – spoke about the reception back home of their success.

The trio said that they worry about being mobbed in Bradford now that everyone recognises them.

Kelly said: “We don’t feel like celebrities, but we can’t go anywhere anymore. It’s a headfuck knowing that we can’t ever go back to normal jobs.

“To be honest, there is jealousy from people back home, but we haven’t really had much love from the music industry either. We’re not a proper boyband. There’s nothing normal about us. We haven’t ever asked for any handouts and every single thing that we do is new. But this is not about proving people wrong – they’ll eventually understand our vision.”

The post Bad Boy Chiller Crew want to work with Elton John for ‘proper banger’ version of ‘Are You Ready For Love’ appeared first on NME.