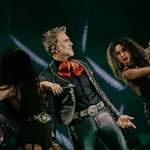 When the pandemic hit in 2020, Alejandro Fernandez had no idea what was going to happen with the future of the touring industry. Though he was connected with fans through social media, important activism campaigns and two live streaming presentations, he admits that it “didn’t compare to the rhythm of work I was used to.”

After seeing that the touring industry was reopening and the effectiveness of the COVID-19 vaccines, Fernandez felt confident enough to kick off his 2021 Hecho en Mexico U.S. tour on Sept. 10 at the Grand Sierra Theatre in Reno, Nevada. The 21-date tour, presented by Live Nation, wrapped up on Oct. 24 at the Arizona Federal Theatre in Phoenix.

“It was one of the most important tours I have ever had in my career here in the United States,” Fernandez tells Billboard of the gratifying experience.

Hecho en Mexico also served as a fundraiser for Families Belong Together, where Fernandez donated over $100,000 from the tour proceeds to assist immigrant families separated at the U.S.-Mexico border.

“The impact of my concerts goes beyond the money, the box office, and the sold-out shows,” he explains. “I have always been a very sensitive person to things that happen, especially if it happens in my country. The important thing is to be able to start something and for people to come together, to educate and invite them to support these causes. I see it as giving my audience a little bit of what they have given me.”

On tour, the Mexican superstar was joined by 25 people on stage, including his full band, his Mexican mariachi, special guests Christian Nodal and his son, Alex Fernández, as well as a handful of guests in different cities.

“History repeated itself,” Fernandez, who on many occasions shared the stage with his famed father Vicente Fernandez, expresses. “In fact, Alex was so reserved that I did not contemplate, nor did I know that he wanted to dedicate himself to a musical career. This was the first time we sang together on tour and it gave me a sense of nostalgia, family, and tradition.”

Hecho en México is also the name of his latest studio album, which made him the first act to achieve No. 1s on Billboard Top Latin Albums in the 1990s, ’00s, ’10s, and ’20s, starting with his first chart entry and 12-week ruler Me Estoy Enamorando in 1997.

Up next, the tour continues to Mexico with shows at Mexico City’s Auditorio Nacional, the Telmex Theater in Guadalajara, and the Pa’l Norte Festival in Monterrey, before moving on to Central and South America and Spain in 2022.

“That is what we have now, while we wait for the health protocols to be finalized in each country,” he assures. “Hopefully this nightmare ends soon and we can live a normal reality around the world.”

Fire Destroys Up to 60 Guitars, 100 Paintings at House of Avett Brothers’ Father

Billboard Buys: Get This Polk Soundbar and Subwoofer Combo for $149