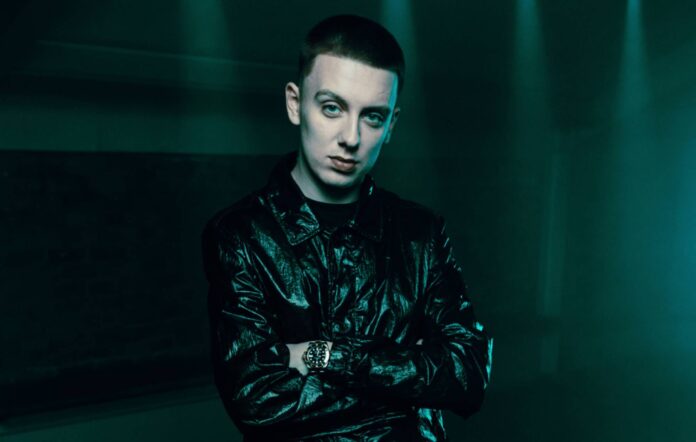 Manchester rapper Aitch has opened up about the recent row over an advert for his new album, which was painted over an Ian Curtis mural in Manchester.

Last week, an advertisement for the rapper’s ‘Close To Home’ was placed over a much-loved mural of the late Joy Division frontman in the city’s Northern Quarter.

In a tweet last week, Aitch said: “It’s come to light that the iconic Ian Curtis mural on Port Street has been painted over with my album artwork. This is the first time I’ve heard of this, me and my team are getting this fixed pronto. No way on earth would I want to disrespect a local hero like Ian.” He added that he was “getting [it] fixed as we speak.”

Speaking to BBC Breakfast, Aitch has now opened up about the incident, saying he was left “fuming” by what had happened.

“I seen it on Twitter… when there was an outrage burst of like, ‘what’s Aitch doing putting his album over Ian’s mural?’, and then I was like, ‘oh god, what’s this?’,” he said. “I don’t pick and choose where I put my billboards or album promo. I just wake up and drive past it, or see it on the internet, just like everyone else.”

Aitch went on to say the situation had left him “fuming for two reasons”: “I was fuming for Ian, and his people and what that mural stands for, and then I was fuming for myself, because I was having such a good week,” he said.

“I was like, ‘the album is coming out in a couple of days, I can’t wait, everything’s going so well’, and then next minute, I was the most hated person in Manchester for about 40 minutes.”

He continued: “But it was out of my control and there was nothing I could do, apart from put a stop to it and get it fixed, and obviously that’s exactly what I’ve done, so I think everyone is my friend again now.”

‘I was the most hated person in Manchester for about 40 minutes’
Rapper Aitch has told #BBCBreakfast he will have a mural of music icon Ian Curtis “fixed pronto” after it was painted over with an advert for his new album.https://t.co/WlHMJRX7lM pic.twitter.com/mxXmZsO13P

In a statement, Amazon Music revealed they had asked an advertising agency to create a mural in the rapper’s hometown, but, they added “unbeknownst to us or to Aitch, the wall the agency chose…already had mural on it”.

They added: “As soon as we learned this, we ordered the production to stop and are working with Aitch to restore or replace the original. Our apologies to all who are justifiably upset.”

Akse P19 said on Instagram that he had been speaking to Aitch’s management, the agency working on behalf of Amazon Music and Manchester City Council. He said all were now “working together to try to get the Ian Curtis mural reinstated”.

Last week, Peter Hook, co-founder of Joy Division with Curtis, said the singer and late band manager Tony Wilson should be honoured with permanent memorials in the city.

“That mural did stand for a lot… I wouldn’t have liked to have been the guy painting over Ian knowing that area of Manchester, it is just a sad occurrence. I suppose in a funny way maybe it will spur someone on to celebrate these people [Curtis and Wilson] in Manchester or Salford,” Hook added.

“I’ve been campaigning for years to put a statue of Tony Wilson in Manchester and Ian Curtis in Macclesfield,” he said, addressing the permanent memorial Macclesfield made to Curtis earlier this year – which Hook himself unveiled.

Speaking about the idea of a statue in Manchester, Hook said: “Maybe I’ll push it… see if we can spur something on.”

The post Aitch says he was “fuming” over Ian Curtis mural ad cover up appeared first on NME.