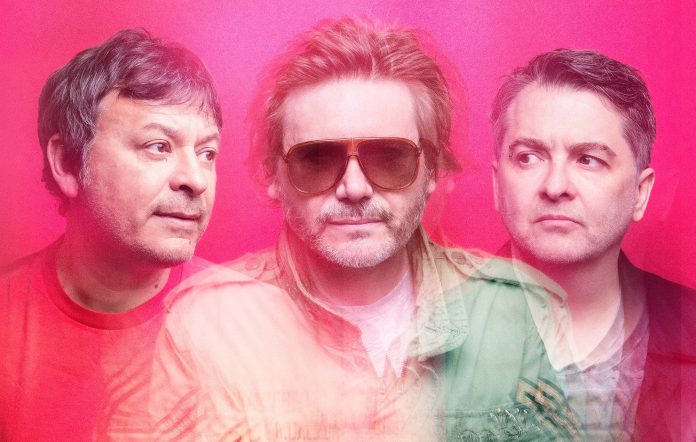 Manic Street Preachers have shared a video for their new single ‘Complicated Illusions’ – you can watch it below.

READ MORE: Manic Street Preachers: “We talked ourselves through oblivion”

The Welsh band’s latest track is taken from their 14th studio album, ‘The Ultra Vivid Lament’, which topped the UK album chart last month, marking their first Number One album in 23 years.

‘Complicated Illusions’ is described by the group as “the battle between chaos and calm with a gliding majestic lyrical flow – leaning towards More Than This era-Roxy – Bowie’s Lodger – peak pop Echo and the Bunnymen.”

Released alongside a hazy set of visuals created by Kieran Evans, the filmmaker said of the track: “I’ve always felt the track feels like an epic soundtrack to an as yet made film so I’ve gone for a visual/lyric type affair using a similar aesthetic / approach to a lot of Netflix type title sequences using minimal / small type over multi-layered imagery.”

You can watch the video for ‘Complicated Illusions’ below:

Manic Street Preachers are currently in the middle of a UK tour which continues at O2 Academy Bournemouth tonight (October 10). See the band’s remaining dates below.

“When I listen to ‘Nevermind’, I just think: ‘My God – it’s just fucking amazing’,” Bradfield told NME. ‘Lithium’ is the one I love. You hear that song and you just know that the band are all looking at each other and swinging, saying, ‘We know how to do this’.

“It’s a beautiful moment where you know everything clicks. [Manics] had that on ‘The Holy Bible’, and just knew that we had it in the bag with the way that we were playing in the studio.”

He added: “I was jealous of ‘Nevermind’ for a long time, and always will be. A truly great rock record is one of the hardest things to achieve.”