HomeNewsWatch Halsey team up with Lindsey Buckingham for performance of ‘Darling’ on...
News 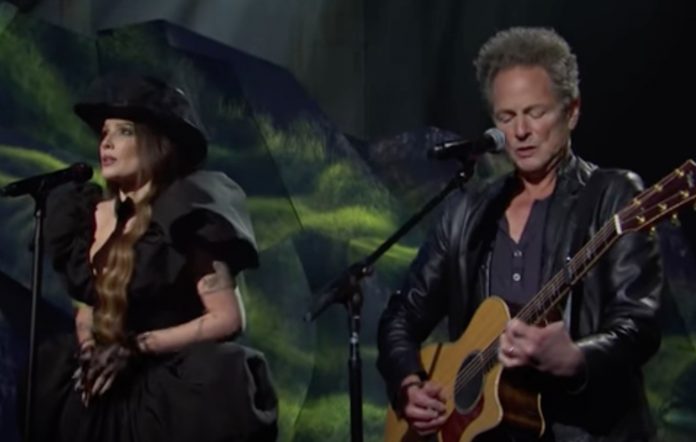 Halsey was the musical guest on last night’s (October 9) episode of Saturday Night Live, and for one of their songs was joined by Lindsey Buckingham.

Halsey and the former Fleetwood Mac guitarist collaborated on ‘Darling’, an acoustic ballad from the former’s latest album, ‘If I Can’t Have Love, I Want Power’, co-produced by Nine Inch Nails frontman Trent Reznor and his frequent collaborator Atticus Ross.

The pair performed in front of a dimly lit, grey and green hazy backdrop, with Halsey dressed in a puffy black dress and netted hat, while Buckingham, playing an acoustic guitar and providing additional vocals, donned a leather jacket and denim jeans.

Halsey also delivered an energetic performance of their album’s lead single ‘I Am Not A Woman, I’m A God’. In it, she commanded the stage in a leather bodysuit set against a futuristic backdrop.

You can see both performances below:

Halsey‘s accompanying film to new album ‘If I Can’t Have Love, I Want Power’ was released to the HBO Max streaming service last Thursday (October 7).

The film, described as “a disruptive album and film experience from the mind of Halsey”, was previously only available to watch in IMAX cinemas.

A synopsis for the film reads: “Set to the music of Halsey’s fourth studio album, this one-of-a-kind film experience stars the two-time GRAMMY nominee as the young and pregnant Queen Lila. After a shocking event, Lila unlocks a paranormal power within and discovers her ability to create life (and end it).

“Offering a stunning visual treat for fans, this evocative, horror-tinged fairytale explores the labyrinth of sexuality and birth. ‘If I Can’t Have Love, I Want Power’ was written by Halsey and directed by Colin Tilley. The album was produced by Trent Reznor and Atticus Ross. The film was produced by Halsey, Jamee Ranta and Anthony Li.”

It comes a few days after Halsey shared a new remix EP of their track ‘I Am Not A Woman, I’m A God’, featuring reworks by Hot Chip, Underworld and more.

The post Watch Halsey team up with Lindsey Buckingham for performance of ‘Darling’ on ‘SNL’ appeared first on NME.