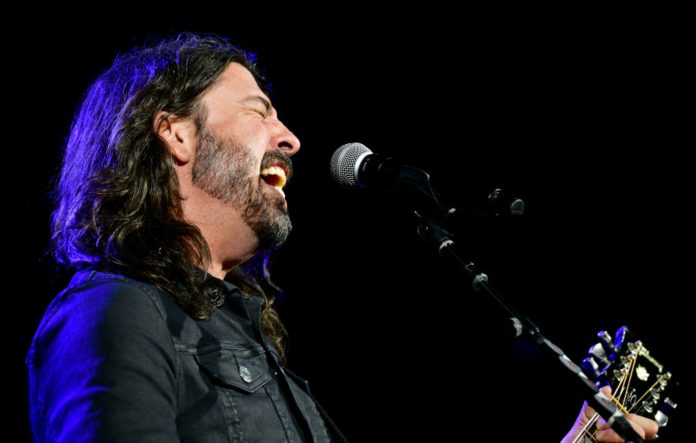 Dave Grohl is currently on a book tour in support of his new memoir The Storyteller, and during a recent stop in New York he got behind a drum kit and played along to Nirvana‘s ‘Smells Like Teen Spirit’.

The event – which took place on Tuesday (October 5) at The Town Hall – saw the Foo Fighters frontman share some of his life adventures live and in-person, from his early days growing up in the suburbs of Washington, DC, to hitting the road at the age of 18, his time as drummer for Nirvana, and all the music that followed.

During the event, Grohl performed acoustic versions of tracks like ‘This Is A Call’, ‘My Hero’, ‘Learn To Fly’, ‘Best Of You’ and ‘Everlong’, but the biggest moment came when he drummed along to his former band’s mega hit, ‘Smells Like Teen Spirit’.

The track is taken from Nirvana’s landmark second album, ‘Nevermind’, which celebrated its 30th anniversary last month. A special reissue of the album is set to be released on November 12 to mark the occasion.

You can see footage of Grohl playing along to ‘Smells Like Teen Spirit’ below:

Dave Grohl had a solo event the other day at @TownHallNYC for his new book and played the drums over Smells Like Teen Spirit pic.twitter.com/JCZtnRlK9b

The New York event was one of five events held around the world, including one at London’s Savoy Theatre, which NME‘s Jordan Bassett was in attendance for, recounting the night in a four-star review.

The remaining dates on Grohl’s book tour see him perform two nights at The Ford in Los Angeles on October 12 and 13.

A press release for Grohl’s book tour reads: “From his formative years on the DC punk rock scene through the decades of music that followed, Dave will share the experiences that have defined him – plus some special surprises – all 100% live and in-person in four select cities.”

The Storyteller is out now.

The frontman read the 2014 story based on the lyrics of ‘Octopus’s Garden’, a 1969 cut from The Beatles’ album Abbey Road’, on Friday’s (October 8) episode of the CBeebies show.