Pixies on having curry with and being covered by David Bowie 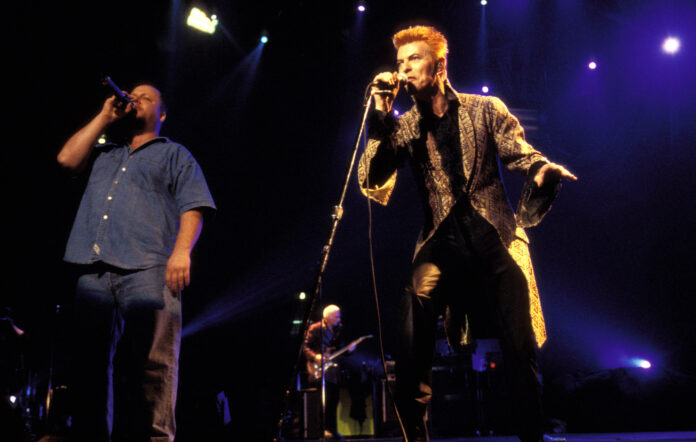 Pixies have told NME about going for curry with David Bowie and having the legend cover one of their songs.

This week, the alt-rock legends took NME‘s Does Rock ‘N’ Roll Kill Braincells?! challenge, where veteran artists are quizzed about their history in the music industry.

During the interview, frontman Black Francis and drummer David Lovering were asked about Bowie covering Pixies’ ‘Cactus’ for his 2002 album ‘Heathen’.

“It’s cool when people like your music and do versions of it but I don’t like to make a big deal out of it,” Francis said. “Bowie was just a music geek – like me. It’s too star-fucky if you say [adopts an air-headed voice] ‘Oh my God, he likes me! He looked at me!’. Everybody’s shit stinks. I’m not pushing an egalitarian agenda here, but let’s get real!”

Discussing an in-person encounter with the legend, Lovering remembered: “David Bowie once took us to an Indian restaurant in Manchester, and I sat next to him shooting the shit. At the end, he offered to pay and pulled out a credit card and said [his birth name]: ‘David Jones!’”

Elsewhere, Francis discussed covering Bowie’s ‘Fashion’ as a gift for the legend’s 50th birthday. In it, he changed the titular lyric to “fascist”.

He explained to NME: “I read somewhere that was the original lyric, and at the very last minute, it was changed to ‘Fashion’, which was deemed better. To be amusing, I did a cover as my gift and my thank-you for letting us participate in his 50th birthday show. John Flansburgh from They Might Be Giants arranged the session, and I brought along my father to watch me record for the first time.”

‘Vault Of Heaven’ comes as the second track to be shared from ‘Doggerel’, following the June release of ‘There’s A Moon On’. The album itself will arrive on September 30 via BMG, with three back-to-back gigs in California – San Diego on Saturday October 1, Anaheim on Sunday 2 and Los Angeles on Monday 3 – due to follow. After a single day off, they’ll hit New York City to play Terminal 5.

In announcing ‘Doggerel’, Francis said the band were “trying to do things that are very big and bold and orchestrated”. He continued: “The punky stuff, I really like playing it but you just cannot artificially create that shit. There’s another way to do this; there’s other things we can do with this extra special energy that we’re encountering.”

The band will headline next month’s End Of The Road festival in Dorset.

The post Pixies on having curry with and being covered by David Bowie appeared first on NME.