HomeNewsHarry Styles talks Joni Mitchell, The Cribs writing for One Direction and...
News

Harry Styles talks Joni Mitchell, The Cribs writing for One Direction and more in Nardwuar interview 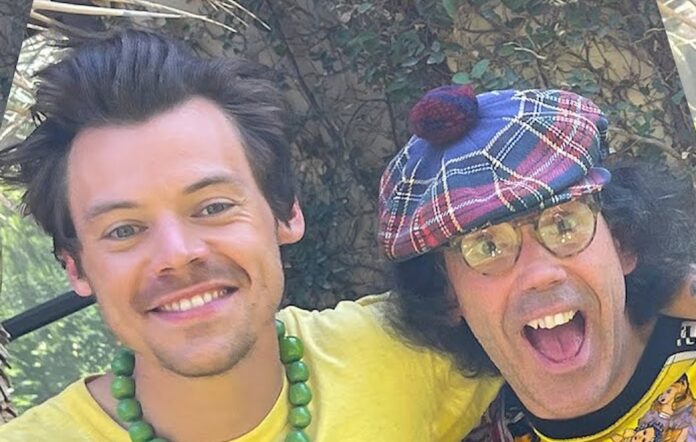 Harry Styles has been interviewed by Nardwuar – check out the interview below, in which he discusses Joni Mitchell, The Cribs and more.

READ MORE: The Cribs on the songs they wrote for One Direction but kept for themselves

The interview took place backstage at Coachella earlier this year, where Styles played a pair of headline sets, in which he covered One Direction with Lizzo and was joined by Shania Twain.

During their interview, Styles told Nardwuar about the time he went to Joni Mitchell’s house and performed a cover of her track ‘River’ in front of the iconic singer.

“She had a Christmas carol singalong one time and I was invited by the wonderful Brandi Carlile,” Styles revealed. “It was very fun.

“I wasn’t going to sing anything, and then Brandi volunteered me to sing ‘River’, which was one of the more nervewracking moments of my life.”

Discussing how The Cribs wrote songs for One Direction but then ended up keeping them for themselves, Styles added: “That was I think in 2012-2013. I had a couple of friends who were friends with [Ryan Jarman] and we spoke to him about writing something. I don’t think it ended up happening, but I like The Cribs.”

Watch the full interview below.

Discussing their writing for One Direction last year, Gary Jarman told NME: “There were definitely conversations between our managements, and me and Ryan were supposed to go to Los Angeles and London to do some writing, but our schedules clashed.

“We actually had ‘Burning For No One’ and ‘An Ivory Hand’ earmarked for One Direction on a demo, but when the sessions never happened, we used them ourselves.”

Elsewhere, Florence Pugh has criticised the focus on her sex scenes with Styles in upcoming psychological thriller Don’t Worry Darling.

Directed by Olivia Wilde, the film follows young couple Alice (Pugh) and Jack Chambers (Styles) in the 1950s, whose happy marriage starts to unravel when she becomes suspicious of her husband’s work on a secret project.

A lot of attention around the film has been drawn to the sex scenes between Pugh and Styles, with director Wilde saying last year she wanted to make audiences “realise how rarely they see female hunger, and specifically this type of female pleasure” on screens.

Speaking to Harpers Bazaar, however, Pugh said she doesn’t want Don’t Worry Darling to be “reduced” to the sex scenes.

The post Harry Styles talks Joni Mitchell, The Cribs writing for One Direction and more in Nardwuar interview appeared first on NME.