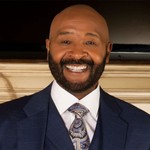 Rushion McDonald, who executive-produced the Steve Harvey daytime talk show from 2012 to 2017, will spearhead production for the inaugural Jazz Music Awards: Celebrating the Spirit of Jazz on Oct. 22, 2022, at Cobb Energy Performing Arts Centre in Atlanta.

Presented by Jazz 91.9 WCLK, the Jazz Music Awards recognizes “a broad spectrum of creators within the national and international jazz world, from mainstream and contemporary musicians, vocalists, and big bands, to composers, individual songs, and full-length albums,” according to a release from the station.

WCLK’s program director David Linton reached out to McDonald with the task of leading the show. In addition to producing the awards ceremony, McDonald’s 3815 Media is set to helm the ceremony’s red-carpet event along with the show’s live global telecast.

Jazz musician and three-time Grammy winner Terri Lyne Carrington is slated to lead the show’s musical direction and act as a consultant. Carrington has won two Grammys for best jazz vocal album (The Mosaic Project, 2011, and Beautiful Life, 2014) and one for best jazz instrumental album (Money Jungle: Provocative in Blue, 2013). In addition, Carrington is on the Recording Academy’s board of trustees.

Leading up to the awards ceremony, WCLK is scheduled to host an on-campus event for students at Clark Atlanta University, a Historically Black College and University. The program will include interactive learning sessions between students and leading jazz musicians.

“As soon as COVID lifted, you saw the performers out on the road again and the jazz festivals were back,” said Wendy Williams, who has been with the station for 27 years and is currently the general manager of WCLK. “Now, this is a collective way to have them all on a stage being loved upon, being celebrated the same way we see at other music awards shows. We have to do this.”

WCLK’s Jazz Awards are just one of the awards shows that honor the best talent in the genre. Other notable jazz awards include BBC Jazz Awards, NEA Jazz Masters and The Mary Lou Williams Women in Jazz Awards.