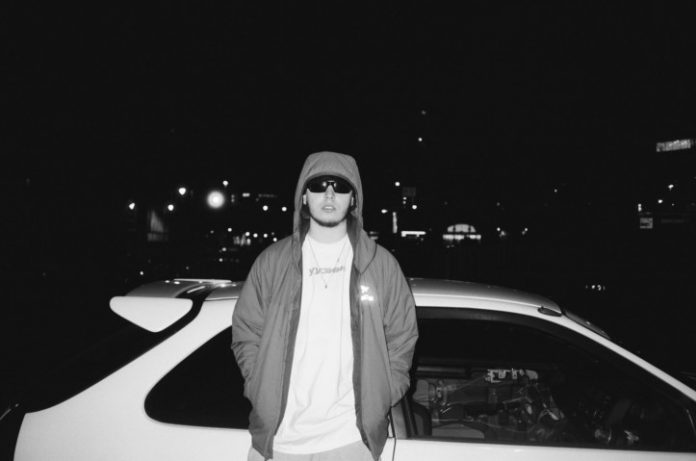 Brummie beatmaker dylantheinfamous is back with his second MOONLOOPS project on Blah Records. The 0121 native delivers 21 interstellar instrumentals, all produced, mixed and mastered by the man himself. He blends lo-fi hip hop with classic R&B cuts, making a beat tape perfect for space shuttle speakers.

Interviews with Mr. Infamous are few and far between, but we managed to pull him away from Ableton for a chat about all things Dylan. We discussed his impressive partnerships with the likes of Obijuan, jaydonclover, Bisk and CLBRKS, and learnt of an upcoming project under his MC alias Dylan Gray. Find out what it takes to be the definition of a prolific producer and why dylantheinfamous doesn’t want to “paint stormy clouds all the time”. We have lift-off.

If you managed Aston Villa for the rest of the season, what would you change?

For you, what separates a MOONLOOPS tape from your other instrumental releases?

“To be fair, I kinda make MOONLOOPS in the winter months. It’s a bit of isolation and solitude. It’s not a sad tape but it’s quite an emotional tape. It taps into a lot of emotions so yeah, it’s definitely a deeper release than a lot of the other stuff I do.”

The second half in particular has a throwback R&B feel, where does the tape pull from?

“Yeah definitely. The idea behind that was, you know them early R&B songs with almost like cringey forced emotion, to take that and turn it into something a bit more real and heartfelt is quite an interesting concept that I like working with. I did it on the first MOONLOOPS as well and I took from romance movies and chick-flicks that might seem corny on the outside, but you can manipulate and work into something that’s a bit deeper. In my opinion anyway, that’s what I’m trying to do.”

“This bro [shows desk]. It’s literally a Mac, I’ve got a MIDI keyboard that I don’t really use, but it’s Ableton and sometimes the SP-404. For me, Ableton is like, if you have an idea in your head, you can just throw it down, you ain’t gotta mess about. I was on Logic for a bit but with Ableton you can just get your ideas down and work at your own pace. So definitely Ableton.”

What’s the production tip you wish you knew earlier?

“That’s a hard question man. I’m still learning this, but mixing drums. Definitely mix your drums because it can be very tempting to put some drums over a sample and think it sounds good and wrapped. But when you shape the sound of your drums and really manipulate the sound of them, you can do anything with them. The opportunities are endless. If anyone is looking to sample and do their own drums over it, definitely work on your mixes and your mixing of your drums.”

What other producers do you rate at the moment?

“There’s a few man. I like what Dweeb is doing – he just put out an album with CLBRKS that’s cold – Dweeb’s killing it. I definitely fuck with The Alchemist obviously, of course. Obviously Madlib as well. It sounds kinda selfish but I’ve been focusing on myself a lot recently. I’ve been listening to my old music and thinking how I can improve it, so I’m a bit out the loop right now.” [Laughs]

So what sort of things have you noticed that you think you could improve on?

“Not the mixes themselves because I like how they’re kinda raw, but definitely the way the mixes make sense. Not every track has to be super gritty and super punchy. I’m learning to tone down some bits sometimes and that can help more in just turning things up and pumping it through.”

CLBRKS shouted you out in our chat, and having produced his classic EP Igloo., is there more to come from you two?

What got you to drop verses as Dylan Gray on Bisk’s latest project?

“First of all, shout out Bisk init. The artists I would work with every day if it could be that, are either Bisk or Obi cos they’ve both got the same mindset where they just wanna do music. All the other shit can come later, we just wanna work on the music man. Beat after beat, rap after rap – let’s do it. But with Dylan Gray, it’s more of a… I didn’t realise until a few years ago how Birmingham hasn’t really got a voice. We’ve got artists coming out of Birmingham that are doing their thing, but you know, if you think of Manchester you’ve got like [Black] Josh, London there’s about a million artists, Bristol has its own scene, I just felt like I had something to say coming from this environment. Not that it’s that different to Manchester or London, but Birmingham has its own little quirks man. It’s definitely something I’m looking to explore more in the future. I’ve been working on a tape for Dylan Gray. I don’t know what it’s called yet and I don’t know when it’ll be out, but it’s coming.” [Laughs]

You’re an elusive character, who is Dylan away from the desk?

“So they say man. To be honest, it’s corny as fuck saying this, but music is what I do. I put my life into it, you know what I mean? Every day I’m making beats, every day I’m at the desk. Obviously, as you know, I support the Villa so that takes up a bit of time as well. I like watching films and that but really music is where it’s at man. That’s what I’m devoting myself to and that’s what I want people to know me for.”

Your name has been attached to bits on Blah for a couple years now, how’s it been for you working with a label like that?

“I’m not like officially signed to Blah but they’re the guys man. I think I sent Josh some beats when I was about 16 and they ended up on Yung Sweg Lord – ‘Thinkin‘ and ‘Dem Ways‘. That was just a really random thing man: I saw his email somewhere and thought ‘Fuck it, let’s see how this goes,’ and we’ve been working since then. And then I hit up Bisk and we were working, he must have shown Lee [Scott] some bits and he fucked with it. Then we did the languid.oceans thing with Obi and looms, so it’s all just been organic man. They’ve looked out for me so shout out Blah definitely.”

“A lot of shit man [laughs]. I’ve got quite a few productions coming. I’m tryna branch out a bit because obviously I’ve got a lot of work with Bisk, Obi, CL, so I’m tryna find new voices to work with too. Obviously I did the tape with Immi Larusso recently, that was really fun. His whole perspective on music is different to anyone I’ve worked with man. It’s more like vibe music, you can throw it on and just enjoy it. But yeah, I’ve got productions with all the usual suspects coming out soon. I’ve got Obi, Bisk, possibly a languid.oceans, who knows… I’ve got some stuff with Elijah Bank$y, jaydonclover of course, Franklin Armstrong of course, Dylan Gray coming soon. Working man.”

Contrasting this tape and your jaydonclover tunes with the harder tracks you do with Obi etc., do you have a couple of sides that you’re trying to show?

“Definitely man. The way that I view beats, especially since doing the vocal stuff, the beats are like if it’s a painting then it’s the setting. It’s the backdrop, it’s the sky, it’s the pavements. Then you let the artists do their thing on it. I don’t just want to paint stormy clouds all the time, you know what I mean? Sometimes I wanna paint pretty pictures man, and that’s what my work with jaydon is there for, and Obi as well – we’ve done some nice stuff in the past. But I don’t want to limit myself to just gritty, hard shit all the time because I don’t listen to that all the time.”

The production is sick on that latest one with jaydonclover.

“‘Secondsin‘, yeah man. jaydon is sick. The funny thing with jaydon is she lives literally down the road from me. She hit me up on SoundCloud and I must have aired her for like a year, just busy you know. But turns out she was down the road init and we’ve been making classics since we linked up. It’s funny how it works out like that. It’s closer than you think.”

You’re a man of great partnerships, always bringing the best out of people.

“I appreciate that a lot man. When I work with artists I like to really focus on their sound. That’s why I like doing these projects with a single artist rather than getting loads of people together. I like focusing on one style and trying to bring out different things in them, really hone in on what they’re tryna do. Definitely man.”

Peep our playlist compiling all the songs and artists mentioned above: