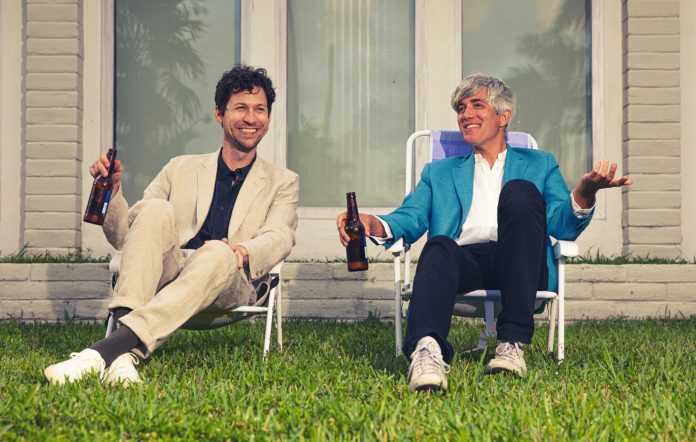 We Are Scientists have shared a new track called ‘Sentimental Education’ – listen below.

READ MORE: We Are Scientists look back on ‘With Love & Squalor’: “It’s been a rollercoaster ride, in that we’ve been throwing up a lot”

The New York duo – aka Keith Murray and Chris Cain – released the euphoric single yesterday (October 6) as the latest preview of their new album ‘Huffy’, which arrives tomorrow (October 8).

Announcing the song this week, We Are Scientists said that it “was guaranteed to keep summer alive for at least a few more days”.

‘Sentimental Education’ arrives with a sunkissed, beach-set video in which Murray and Cain lark about on a boat, swim in the ocean and drive around town in a convertible 4×4. Tune in here:

Meanwhile, We Are Scientists are set to embark on a UK and Ireland headline tour this November/December. Shows are scheduled at venues in Sheffield, Leeds, Glasgow, Liverpool, London and other cities.

They’ll also play a string of acoustic instore gigs this month, kicking off in Brighton this Saturday (October 9). Tomorrow (October 8) will see WAS celebrate the release of ‘Huffy’ by performing a special livestream show at 7pm BST – find all the details here.

Speaking to NME in 2019, We Are Scientists talked about their origins in New York in 2005. “That era in New York City, where we’d moved just a couple of years prior, was a really fertile music scene,” said bassist Chris Cain.

“There were a lot of bands that were incredibly inspiring to be around and see in their early days, like The Strokes and Yeah Yeah Yeahs. We definitely felt like our songs were capable of competing in that world.”