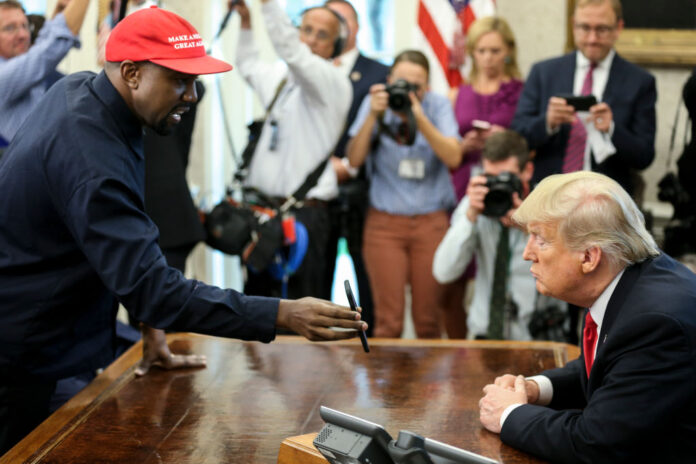 When even the Trump team is raising eyebrows at your circle, you know you have some reconsidering to do. That’s exactly what Kanye West is dealing with after hanging out with white nationalist Nick Fuentes. They traveled together from LAX to Miami to meet with former President Donald Trump at his Mar-a-Lago resort. However, given what anonymous sources close to Trump’s camp told NBC News, Ye’s impromptu meetings aren’t good press for anyone involved.

Moreover, the Chicago rapper announced his visit via his recently reinstated Twitter account on Wednesday. “First time at Mar-a-Lago, rain and traffic,” he wrote. “Can’t believe I kept President Trump waiting and I had on jeans… yikes.”

“What you guys think his response was when I asked him to be my running mate in 2024?” he concluded. Ye officially put his hat in the election ring for 2024 on Thursday, with a video that discussed the meet-up. Despite the respect, it seems things weren’t so pretty. He said that him and Trump got fired up at each other, and claimed that Trump dragged his ex Kim Kardashian’s name through the mud.

However, Trump has a different view on that dinner. In a message posted to his Truth Social platform, he wrote, “This past week, Kanye West called me to have dinner at Mar-a-Lago. Shortly thereafter, he unexpectedly showed up with three of his friends, whom I knew nothing about. We had dinner on Tuesday evening with many members present on the back patio. The dinner was quick and uneventful. They then left for the airport.”

WASHINGTON, DC – OCTOBER 11: (AFP OUT) Rapper Kanye West , left, shows a picture of a plane on a phone to U.S. President Donald Trump during a meeting in the Oval office of the White House on October 11, 2018 in Washington, DC. (Photo by Oliver Contreras/Getty Images)

According to anonymous sources from Trump’s camp, the former president had no idea who Nick Fuentes was. For those of you who don’t know either, he is a 24-year-old far-right conspiracy theorist, Holocaust denier, and white nationalist. He used to publish hateful rhetoric on sites like YouTube and Twitter, before many platforms banned him for dangerous comments.

It’s unclear why Fuentes and Ye have linked, or for how long. Yet Trump’s team is apparently wary of their profiles. These anonymous sources (allegedly two advisers to the campaign and one non-affiliate at the dinner) called the public meet-up a “f***ing nightmare.”

“If people are looking at [Florida Gov. Ron] DeSantis to run against Trump, here’s another reason why.” As such, these comments suggest that conversing with the “I Love It” star and Fuentes will hurt Trump’s 2024 chances.

Additionally, they pushed back on Trump’s obliviousness to the ordeal. While he did not know Fuentes, sources say that one of the visitors was Karen Giorno, the Trump campaign’s Florida director in 2016. According to these insiders, Trump knew her by “name and sight.”

In the aforementioned campaign video, Kanye West said that Trump was impressed with Fuentes and that he was a “loyalist.” Interestingly, Kanye also detailed how Trump reacted when asked to be Ye’s running mate.

“When Trump started basically screaming at me at the table telling me I was gonna lose, I mean, has that ever worked for anyone in history? I’m like, ‘Woah woah, hold on, hold on, Trump. You’re talking to Ye.’”

Stay tuned to HotNewHipHop for the latest on the absolutely insane 2024 presidential race and Kanye West’s latest bombshells.