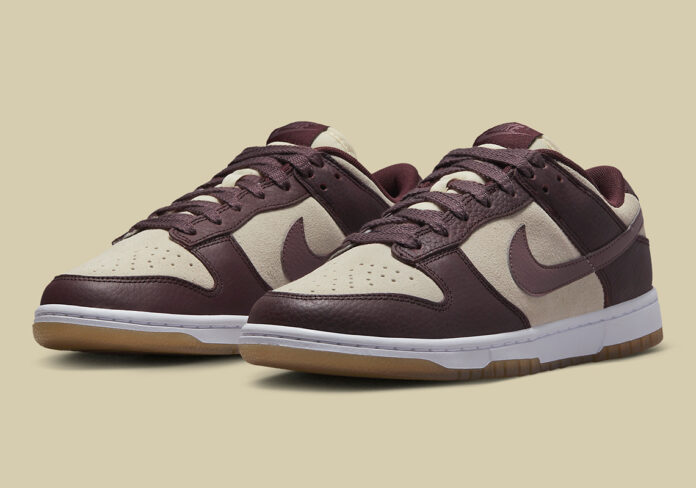 The Nike Dunk Low is unquestionably one of the most popular designs in the sneaker space. Over the past several years, the silhouette has enjoyed fanfare thanks to reissues of old styles, but has also convinced new fans with the help of refreshing looks.

Ahead of spring, Peter Moore’s creation from 1985 has appeared in a muted mix of “Coconut Milk,” “Plum Eclipse,” and “Earth” colors. Base layers take on the lightest of the three aforementioned tones while also introducing suede into the mix. Tumbled leather panels around the toe, along the tongue, and across the heel favor a muted purple hue that breathes new life into the Nike Dunk. Elsewhere, branding hits also feature “Plum Eclipse” makeovers, which the midsole and outsole abandon for a “White” and semi-translucent “Earth” combination.

No nike.com release date has been shared by the brand, but that’s likely to change soon. While you wait, enjoy official images of the pair ahead.

For more sneaker news, check out the Air Jordan 4 “Seafoam” expected to drop on Feb. 9 for $200 USD.

The post “Coconut Milk” And “Plum Eclipse” Come Together On This Nike Dunk Low
appeared first on Sneaker News.

The post “Coconut Milk” And “Plum Eclipse” Come Together On This Nike Dunk Low appeared first on Sneaker News.