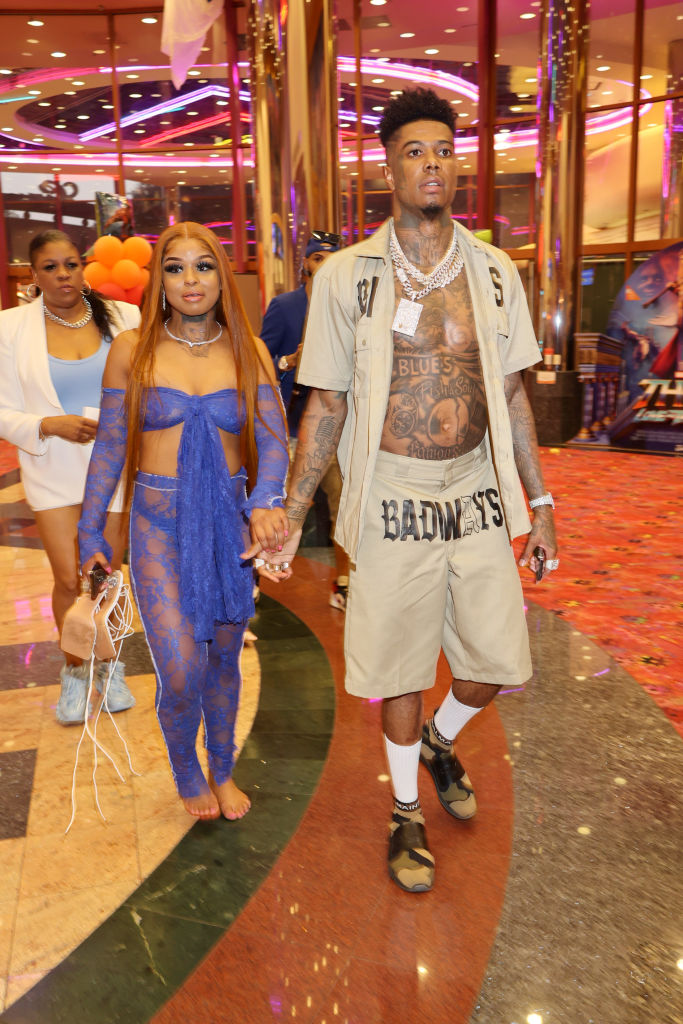 Hip-hop’s most notorious and headline-grabbing couple is adding more fire to the discourse surrounding them. After Blueface was arrested earlier in the year, him and Chrisean Rock are enjoying their time before his January trial. They went to a few clubs in Phoenix recently. However, other developments have really caused fans to lean in. Following a recent video where Chrisean refuses to take Henny shots with Blueface, many believe she is pregnant.

Morevoer, the couple was shopping for sneakers in a new video circling on social media. The California rapper was clutching a bottle of Hennessy, and Rock pleaded “Babe, do not take a shot!” Their host asked “Y’all on a cleanse?” and Rock responded with “No, n***as was sick.” Later in the clip, Blueface invited her to take a shot, and she refused again. “You know I’m really sick, babe,” she said.

Also, Chrisean Rock’s caption of a recent Instagram post supports the theory, at least somewhat. She attached the caption “Mom and Dad” to a picture of her and Blueface.

Unfortunately, it seems as if it hasn’t been completely peaches and cream for the couple. Blueface recently hosted an Instagram live session where he said that Chrisean outmatched him 10-1 when it came to fights between them. As if to prove that she was actually undefeated, she showed pictures of Blueface with two black eyes on camera.

Of course, social media has seen its fair share of brawls between the two. Furthermore, the MC said that the actual reason she isn’t undefeated is because she’s never taken his belt. However, he admitted that she did, in fact, give him those injuries.

“I ate that like a fuckin’ snack and I didn’t hit you back,” he stated. “You literally hit me two times and I was looking at you like…that’s disrespectful.” Regardless of that revelation, they continued to answer fan questions and show some love to each other on the gram.

As one of the most infamous couples on social media right now, people seem stuck between outrage and morbid fascination at this point. However you feel, there will definitely be more. They’ll bring their relationship to the small screen with Crazy In Love, a reality TV series set to premiere later this month on the Zeus Network.

What do you think of Chrisean Rock’s potential pregnancy and her bouts with Blueface? Let us know in the comments and stay tuned to HNHH for what the couple will reveal next.