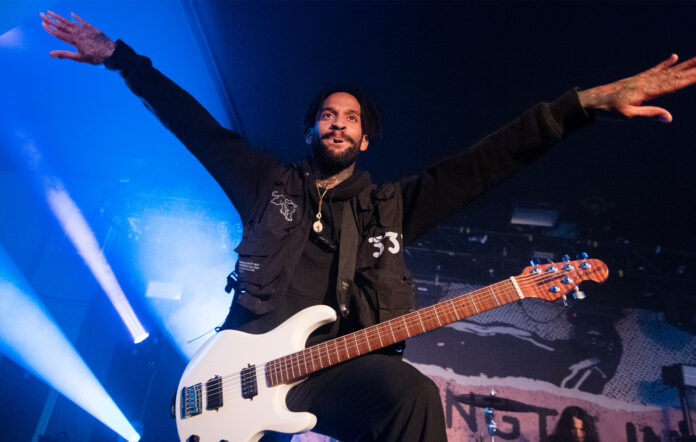 Two members of Fever 333 have left the band, with both guitarist Stephen Harrison and drummer Aric Improta sharing statements that confirm their exits.

Improta was more cryptic in his post announcing the news, explaining that he and Harrison decided to leave the band – which is rounded out by frontman Jason Aalon Butler – together, and that their decision is “layered”. The drummer noted that he’d ultimately “rather dedicate [his] time to projects that operate different than” Fever 333, and teased that he and Harrison “will probably do something together in the future”.

Harrison, on the other hand, was more direct in his explanation, revealing that “things were pretty bad internally” between himself, Improta and Butler, and highlighting “creative differences” that “sort of left [him] with no choice” but to leave the fold. He, too, teased a future project with Improta – using the exact same wording that notes they “will probably do something together in the future” – and pointed out that he “still plan[s] to make music”.

Have a read of Harrison’s full statement below:

Butler is yet to share a statement of his own, or acknowledge those posted by his former bandmates on social media. At the time of writing, the band’s own pages still prominently feature Harrison and Improta. NME has reached out to representatives of the band for comment.

Back in August, Butler told NME that Fever 333’s second album was nearing completion. “I’m wrapping the album in the next month,” he said, “and I’m very excited about it. All self-aggrandising elements aside, for better or for worse and whether people love it or hate it, I feel like I’ve created my idea of a genre-defining album that I’ve wanted to hear my whole life.

“I’ve finally created songs and elements of what that really means to me. I’m really excited to offer something that doesn’t necessarily fit into a place but rather runs concurrently in the progress that is art and music. Something in its own lane hopefully.”

Butler described the sound of the album as an “authentic and tasteful [hybridising]” of “punk rock, rock’n’roll, metal, hardcore, rap, hip-hop, spoken word, a little bit of trip-hop, a little bit of break”, noting that “all of the previous Fever stuff was observational” but “this time, this is what I’ve experienced [and] these are my truths”.

Fever 333 are due to perform next at the Monster Energy Aftershock festival in Sacramento, which kicks off this Thursday (October 6). From there, they have shows booked in Australia for December, and in the UK and Europe at the start of next year.