HomeMusic20 Questions With Walk The Moon: Returning to Touring, Hearing ‘Shut Up...
Music

20 Questions With Walk The Moon: Returning to Touring, Hearing ‘Shut Up and Dance’ At Weddings & Why The Pandemic Resulted in ‘The Best Work We’ve Ever Done’ 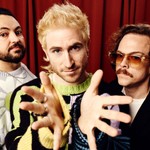 Walk The Moon have become one of the most consistent rock radio crossover acts in modern music: following smashes like “Shut Up and Dance,” “Anna Sun” and “One Foot,” the trio has another ubiquitous single with “Can You Handle My Love??,” which has peaked at No. 16 on the Rock & Alternative Airplay chart. Yet that steady hit creation contrasts with the disruption that the pandemic caused the Cincinnati natives while putting together Heights, their first album in four years, due out Friday (Nov. 12) on RCA.

In the latest edition of Billboard’s 20 questions, Walk The Moon frontman Nicholas Petricca discusses the recording of the album during lockdown, returning to the road, and his two go-to moves when he hears “Shut Up and Dance” at a wedding reception.

1. What’s the first piece of music that you bought for yourself, and what was the medium?

2.  What was the first concert you saw?

Kansas. My dad brought me to see them at a summer fair in Blue Ash, Ohio.

3.  What did your parents do for a living when you were a kid?

My dad was a restaurant manager and my mom was a seventh grade English teacher.

4.  Who made you realize you could be an artist full-time?

I always looked up to artists… such as Jim Borgman the cartoonist, Frank Sinatra, Robin Williams, local actors I would meet at Cincinnati Shakespeare Company… I imagined myself being one of them and didn’t think that was out of the ordinary. It wasn’t until I saw Muse in high school that I realized I was born to ROCK.

5. What’s at the top of your professional bucket list?

Sold-out Wembley. Sweep at the Grammys. Collab and perform with artists I look up to… Annie Lennox, David Byrne, Brandon Flowers, Chris Martin, Kimbra, Miguel, to name a few. Johnny Clegg was on this list, and we wrote and performed together before he passed. Our song “Fire In Your House” is on our new record.

6. How did your hometown/city shape who you are?

Cincinnati had a really diverse and vital music ecosystem when we were coming up. Lots of ambitious and experimental young bands in a sort of friendly competition with one another, kindled by characterful downtown venues, local music festivals, and a revolving door of eclectic music conservatory students.

7. What’s the last song you listened to?

8. If you could see any artist in concert, dead or alive, who would it be?

9. What’s the wildest thing you’ve seen happen in the crowd of one of your sets?

The craziest thing recently that happened was a fan who jumped up onstage – not super unusual, but instead of just dancing around this guy put his arm around me almost in a headlock and it took some strength to get away from him. Fortunately our drum tech Kyle is a jujutsu blackbelt and “removed” the fan before it got too hairy.

10. How has the pandemic affected your creative process?

We were halfway through recording the album when everything shut down in March 2020. A couple months later, we found ourselves upgrading our individual home studios and making the rest of the record over the Internet. Sean’s house became a drum studio, Eli’s massive guitar sounds were coming out of a tiny amp in a closet in his attic. I recorded the vocals in my basement. We did our best to keep the feeling of spontaneity and togetherness alive, even though we were thousands of miles apart… not sure exactly how we did it, but to me it feels like the best work we’ve ever done.

11. Describe the process of recording this album virtually — was it easier or harder than you expected it would be?

One unexpected benefit we discovered was that, when the studio session ended and people signed out of the virtual room, we found ourselves alone in our own creative spaces. We each took liberties and went deeper into our individual creative realms and would come back to the group with new ideas, details, experiments. Sometimes it made it a little more challenging to sift through all the ideas, but it unlocked a new layer of collaboration for us.

12. “Can You Handle My Love??” has been another radio hit for the band. How did it come together, and did you expect it to lead the album as you were creating it?

“Can You Handle My Love??” originated out of a collaboration between K. Flay, producer Tommy English, and myself. We had just written this disco duet together (still unreleased 😉 ), and had all this excitement and confidence built up from what felt like such a win in the studio the day before. All these lyrics about being a wreck and being cool with it, being a mess and owning it, being human just started to flow through. We were playing with sounds that reminded us of the ‘90s bands we grew up listening to, and when I brought the demo back to the band it all became real and three-dimensional. It felt like something ambitious and timeless, and I knew it could be a great lead single for us.

13. What’s one song from the album that you think will surprise fans?

The title track “Heights” opens the record, and it’s a mean one. In a way it’s the most faithful ‘80s shoutout on the record, but there are some sudden, heavy left turns that I imagine will surprise people, especially if they’re not paying attention, hehe 😀

14. “Shut Up and Dance” has become a staple on wedding and celebration playlists. Have you heard it at a large celebratory gathering yet? What was it like if so?

Yes, I’ve been to a few weddings now when it’s come on, and I have two approaches. Either, one, I take off my shirt and go ape-s–t, or two, I slink into the background and out of mind like the Shadow and just people-watch. So far, both options are good fun.

15. What’s it been like being back on the road performing over the past few weeks, following an extended shutdown?

“American Woman” (Lenny Kravitz version), “Luck Be A Lady,” and my lost favorite, that I’ve sadly felt obligated to retire, is “I Believe I Can Fly.”

17. What’s one thing your most devoted fans don’t know about the band?

Maybe one thing that nobody knows is, at the beginning of a tour, we often feel like we are barely keeping it together. Rehearsals go by so fast and there are so many moving pieces, it feels like a miracle the first show goes on at all, much less that people don’t notice anything is amiss. At the same time, it’s often those shows which feel a little dangerous that end up being our favorites. I don’t really believe in a ‘bad’ show. They’re all special to me, honestly.

“At Last” by Etta James.  Every time.

19. Which TV show do you recommend binge-watching?

20. What’s one piece of advice you would give to your younger self?

Don’t be afraid to hurt people’s feelings with your truth.  You save time, energy and your own happiness if you can be courageously authentic.