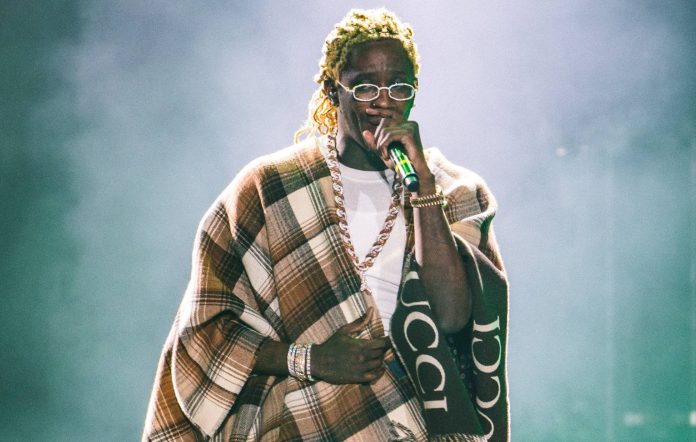 Young Thug has filed a lawsuit against a luxury apartment building in Atlanta, The Trace, alleging its concierge was responsible for the loss of a bag containing over $1.1million (£800,000) worth of valuables.

READ MORE: How Young Thug become one of the most influential moguls in modern rap

According to legal documents shared by Digital Music News, the alleged incident took place on November 1, 2020, when Thug accidentally left a Louis Vuitton bag (itself worth around $2,500, or £1,820) next to his Lamborghini. A resident reported it to The Trace’s concierge, leaving it in the care of an employee.

The lawsuit, filed in federal court in Georgia, alleges that the employee had placed the bag in “a secure/locked location” with a note instructing other employees not to release it without her permission, assuring Thug he’d be able to retrieve it from the concierge. Another employee, however, allegedly passed the bag over to an unnamed individual with no relationship to Thug.

Thug is suing The Trace for damages, citing negligence and failure to train its employees. As his representative wrote in their filing, the concierge employees “undertook a duty to safeguard and return [Thug’s] property” when they agreed to hold the bag. The filing also claims that The Trace’s staff have been “unreasonable and stubbornly litigious”.

It’s noted in the filing that Thug wants The Trace’s parent company, JLB Peachtree Management, LLC, to stand trial before a jury. He seeks “the full present day value of his lost property in an amount to be proven at trial”, and an unspecified value of funds to cover litigation and attorney’s fees.

At the time of writing, it appears The Trace has not commented publicly on the lawsuit. NME has reached out to the complex as well as a representative for Young Thug for comment.

In a five-star review, NME writer Kyann-Sian Williams said: “‘Punk’ was long-awaited, and, boy, did Young Thug live up to its hype. It’s so different from the rest of the music he has been putting out, and Young Thug shows that he can make hits can transcend the rap world. Many say Young Thug is one of the greatest musicians of the current generation, and with ‘Punk’, he’s proved that to be true.”

In addition to his performance at this year’s Life Is Beautiful festival, Thug has performed tracks from ‘Punk’ during a set for NPR’s Tiny Desk series, a show by luxury fashion brand Givenchy, and most recently on last week’s episode of Saturday Night Live.