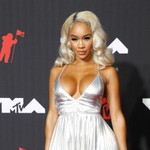 Saweetaween came early this year, with Saweetie sharing her purrfect Catwoman Halloween costume on Friday (Oct. 29) — and she had the endorsement of the feline supervillain herself.

In a video posted to socials Friday, Saweetie joins forces with Halle Berry for a quick 23-second clip that shows the pair meeting on a rooftop, with the rapper wearing a spot-on re-creation of Berry’s Catwoman costume from the campy 2004 movie of the same name. Saweetie lip-syncs to Berry’s actual dialogue from the film, purring, “You see, sometimes I’m good. Oh, I’m very good. But sometimes I’m bad — but only as bad as I wanna be.”

A record scratches as Berry walks in and asks, “What the hell is going on here?” Saweetie sweetly responds: “I’m just trying to get out here and get these coins.” After an “intense staredown,” Berry relents: “I know dat’s right.”

Berry shared the video on her own socials with the caption “There’s enough room for more than one Catwoman,” while Saweetie captioned her post “had to put on for the best Catwoman to ever do it,” using the hashtag #Saweetaween.

This is hardly the first time Saweetie has gone big for Halloween: Last year, she dressed up as all three members of Destiny’s Child and re-created the group’s “Bootylicious” single art. She also dressed up as RuPaul as well as Mystique from X-Men for Halloween 2020 — excuse us, Saweetaween 2020.

Will we get more looks this year too? We’ll have to wait and see.

See the Saweetie/Halle Berry mash-up below:

had to put on for the best Catwoman to ever do it @halleberry #saweetaween pic.twitter.com/OlGj5b2M80

Meanwhile, Berry is wondering where all the excitement over her panned Catwoman movie was when it first arrived in 2004. “I’m seeing all the Catwoman love, everybody,” Berry tweeted Monday, quote-tweeting a fan’s praise for the film. “Where were you guys 17 years ago?” she added with a cry-laughing emoji.

Berry famously won an Oscar for Monster’s Ball in 2002 — becoming the first woman of color to win the best actress prize — and then followed it up with a Razzie for worst actress thanks to Catwoman three years later. She gamely accepted the Razzie in person, while roasting the comic book film in her acceptance speech.