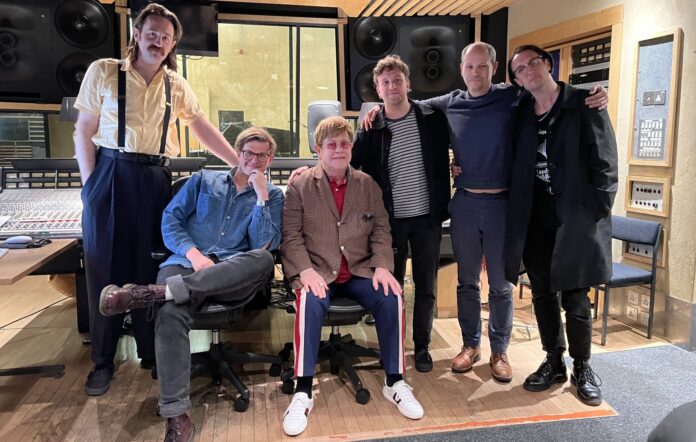 Yard Act singer James Smith has spoken about the “amazing” experience of collaborating with Elton John for their new version of ‘100% Endurance’.

The pop legend, who is a fan of the Leeds-based band, contributed piano to the new studio recording. ‘100% Endurance’ is the latest single released from Yard Act’s debut album ‘The Overload’, which was released in January.

Speaking to Matt Wilkinson on Apple Music 1 today (July 6), as part of his UK City Spotlight on Leeds, Smith said: “We had a lovely afternoon together at Metropolis Studios in London. It was beautiful. We wanted to shine a light on ‘100% Endurance’ a bit more, now the album had been out a bit and we felt we’d established the one side of Yard Act.

“It felt like there’s ways we could accentuate and highlight the melody and the emotion of that track without over egging it, while still sling in a string section and loads of lush Elton John piano all over it. And then, obviously, because he’d been so kind about us and he’d been calling me a little bit, we thought why not ask him?”

Smith said that John’s response to the collaboration offer was “abso-fucking-lutely”, adding: “I think he’d been for a Chairman of the Board meeting at Watford or something [prior to the recording], and then he came to us. It was bananas.

“It was wicked. I don’t think there’s anything more Yard Act than you directly addressing Elton John within a song he’s playing piano on. You know what I mean? The fact he went for it. I was like, “That’s amazing.” It was such an experience and he was just such a sound, sound person. He was brilliant.”

Last week (July 1), John offered his own view on the unlikely team-up: “From the first moment I heard Yard Act, I fell in love with James’ lyrics, and the way he’s delivered the song. Their sound is such a breath of fresh air. When James called and asked if I would come into the studio I instantly loved the idea. I started out as a session musician in the late ’60s and I absolutely loved it then.

“They’re a very special band, with a massive future ahead of them and I’m honoured they’ve let me be a part of their journey.”

Yard Act were recently named in a new study as this summer’s most-booked new music act on the European festival circuit.

The annual study, which is conducted by the European talent exchange programme ESNS Exchange, sheds a light on “the most promising European emerging acts of the moment”.

Yard Act have come out on top of this year’s study, racking up 11 bookings at ESNS Exchange-affiliated festivals in 2022.