Will Travis Scott’s Nike Air Trainer 1 And Other Collaborations Be Cancelled? 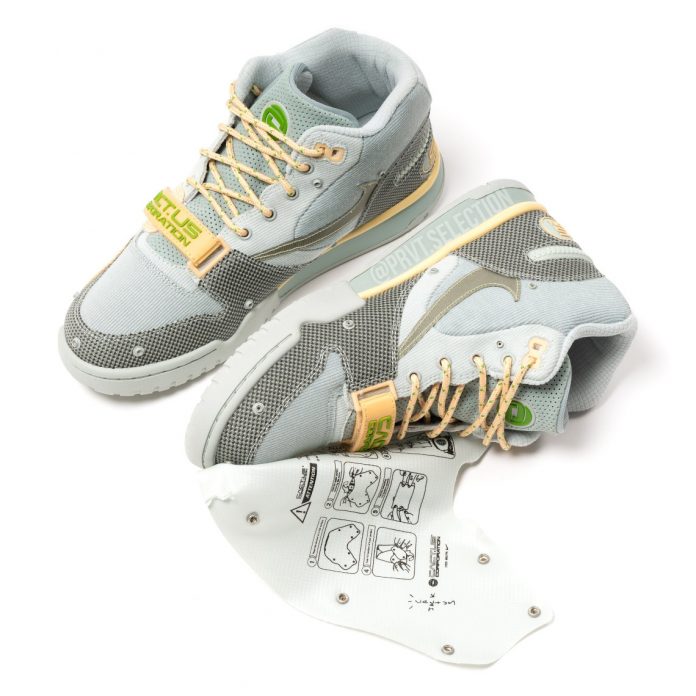 On behalf of the team at Sneaker News, this moment is dedicated to the loved ones of those who lost their lives at Astroworld Festival 2021: Ezra Blount; Brianna Rodriguez; Franco Patino; John Hilgert; Rudy Peña; Danish Baig; Jacob E. Jurinek; Axel Acosta; Madison Dubiski; Bharti Shahani.

On November 15th, NIKE, Inc. shared a notification through its SNKRS app that Travis Scott‘s Nike Air Max 1 collaboration had been postponed “[o]ut of respect for everyone impacted by the tragic events at the Astroworld Festival.” In addition to reimagining the visible Air-cushioned silhouette ahead of its 35th anniversary, the Houston-native had also been working on a Nike Air Trainer 1 collection.

Originally rumored to release throughout Spring 2022, the multi-pair collaboration may be scrapped altogether. Yet, unofficial in-hand images of a “Light Smoke Grey/Honeydew/Particle Grey” colorway have recently appeared on social media, suggesting the only thing both parties involved had been waiting for was the new year. Scott – birth name Jacques Bermon Webster II – has acknowledged the tragic loss of life that took place at his music festival on November 5th, but his sincerity has largely gone questioned across social media networks for its timing and vagueness.

Travis Scott’s influence within the sneaker, streetwear and music spaces, as well as culture-at-large, over the last five years cannot be denied. While both Nike and Jordan Brand might not admit it now (if they ever have), the Cactus Jack-frontman has helped reenergize some of their most iconic sneakers – case in point, the Nike Dunk. The Swoosh’s push-notification from November 15th suggests that Scott’s next Air Max release will eventually take place, as it could’ve quietly removed the sneakers from its calendar and shared an official statement severing ties with the artist. But should it?

Countless netizens have already abandoned everything and anything related to “La Flame,” but there’s surely an audience to which Scott’s fire is still lit. As long as Scott continues to produce “good” product and music, it’s likely he will continue reveling in the pleasures that his creativity and stardom have allowed him. Current affiliates, however, will almost certainly distance themselves, with some surely going forth as if they never partnered with the influential 30-year-old. If every Travis Scott sneaker collaboration that planned to release prior to the Astroworld Festival is cancelled, leaked products will certainly fetch high prices on the after-market. And for the Nike Air Force 1, Air Jordan 4 and other joint-efforts that’ve launched since 2017? Well those shoes will become part of NIKE, Inc.’s neglected, but crucial history.

The post Will Travis Scott’s Nike Air Trainer 1 And Other Collaborations Be Cancelled?
appeared first on Sneaker News.

The post Will Travis Scott’s Nike Air Trainer 1 And Other Collaborations Be Cancelled? appeared first on Sneaker News.