HomeMusicWhitney Houston x Clean Bandit’s ‘How Will I Know’ Gets a Joyous,...
Music

Whitney Houston x Clean Bandit’s ‘How Will I Know’ Gets a Joyous, High-Stepping Dance Video 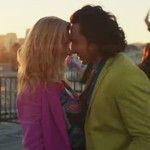 RCA Records is celebrating the 36th anniversary of the release of Whitney Houston’s 1986 Billboard Hot 100 No. 1 hit “How Will I Know” with the release of a joyful, choreo-filled video for the Whitney x Clean Bandit dance remix of the song.

Directed by Ezra Hurwitz (N.Y. City Ballet) and choreographed by James Alsop (Beyoncé), the colorful clip stars Glee actress Heather Morris and dancer Marlon Pelayo as two office drones at W.E. Houston & Associates. Glum Pelayo is excited to match with Morris on a dating app, even though she seems to have put him in the friend zone.

As their cubicle mates burst into dance all around them, Morris slips on her headphones and goes out for a coffee while Pelayo frantically searches for her all around the office. When they finally meet up, he finds the actress on the roof busting out some of her own impressive moves. Spoiler alert: they get together at the end… or do they?

“How Will I Know,” featured on Houston’s 1985 RIAA-certified Diamond self-titled album, will celebrate its 36th anniversary in November. The song was Houston’s second No. 1 of 1986 and the original video earned Houston her first MTV VMA award for best female video later that year. The remix of the smash single by UK electronic trio Clean Bandit was released on Sept. 24 and peaked at No. 23 on the Billboard Hot Dance/Electronic songs chart.

Watch the video below.