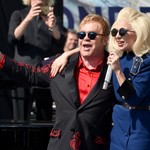 When Elton John had to pause his “Farewell Yellow Brick Road” tour back in March 2020 because of the COVID pandemic, his original plan to retire and tour was diverted. What resulted, however, was a one-of-a-kind collection of collaborations titled The Lockdown Sessions (released Oct. 22) that allowed John the ability to work with legends like Stevie Wonder, Brandi Carlile, Stevie Nicks and Eddie Vedder and legends in the making like Dua Lipa, Miley Cyrus and Charlie Puth.

With more than 300 million records sold, John’s discography is diverse not only in sound but in partnerships and collaborations. His music is played widely across and beyond television, film and stage and is stacked full of famous names, including John Lennon, Eric Clapton and Lady Gaga.

Billboard took a look through the icon’s discography and picked out our 15 favorite collabs from John’s career. Now we want to know: Between our classic list and John’s new album, which Elton John collab is your favorite? Cast your vote below!