HomeNewsWhat’s causing the vinyl delay? “Adele is not the problem”, say music...
News 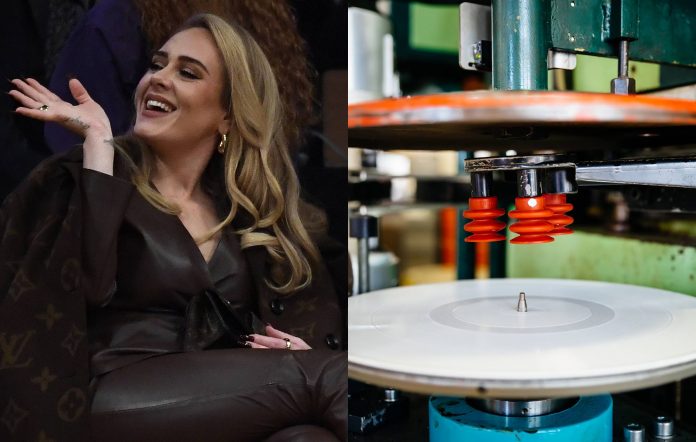 Figures from the music industry have spoken to NME about what’s really causing the delays in manufacturing vinyl and artists getting their albums made – arguing that the blame does not lie at the feet of Adele.

Reports have emerged in recent weeks of a crisis facing vinyl-lovers, with sources telling Variety that more than 500,000 copies of Adele’s long-awaited new album ’30’ have been pressed – causing a huge backlog and problems in the production line for others wishing to get LPs manufactured with the world’s limited resources.

As even Ed Sheeran told Australian radio hosts Kyle and Jackie O about getting his recent album ‘=’ pressed: “So you have to do it like really upfront — and Adele had basically booked out all the vinyl factories, so we had to get a slot and get our album in there. It was like me, Coldplay, Adele, Taylor [Swift], ABBA, Elton [John]: all of us were trying to get our vinyl printed at the same time.”

While doing an interview, @edsheeran has revealed that he had to hurry his new album release because Adele’s team booked most of the vinyl factories in the world for her new album, 30, which drops on November 19th.pic.twitter.com/SiFfQa6FeU

Social media has since seen a number of artists, labels and music fans calling out Adele for taking up the resources — but the problems run much deeper, according to industry insiders.

Josh Cohen runs the independent record label Memorials of Distinction, and also manages artists including Porridge Radio and Caroline. He told NME about how getting vinyl made has “always been a bit of palaver”, but even now he’s trying to plot an album release that won’t be possible until 2023 at the earliest.

“I’m worried about it and it’s insane,” he told NME. “If you work in the independent music world, everything is very last-minute anyway. Trying to get stuff done six months ahead of time is a big ask, now it’s much more than that.

“As a manager, it’s been a huge source of stress. There are a weird number of factors coming together at once. There’s a weird bottleneck of albums being released after a delay because of coronavirus, and there were also a lot more albums made during the pandemic too because they couldn’t tour. Pretty much every artist in the world is releasing an album between September 2021 and September 2022.”

Admitting that “labels are now even assuming that the lead times will grow even more”, Cohen said that this would have a knock-on effect on independent artists’ creativity if they need to rush things through in order to guarantee that their vinyl can be made during a reasonable time frame.

However, he added that the real root of the problem is less of a vinyl crisis and more of “a crisis around the monetisation of music”.

“None of this would be an issue if people could just make money from digital music,” he argued. “The only reason why this matters and that it’s stressful is because no-one buys CDs any more. The only way you can get money from fans of more leftfield music is through t-shirts and vinyl (and cassettes, to some freaks). For the majority of far-left-leaning music fans, vinyl is the way to get their money.

“If you want to make any kind of return on your investment, then vinyl is the only game in town. If Spotify or YouTube were more equitable, we wouldn’t be so reliant on these discs made of crude oil. It’s a weird thing.”

Asked about whether Adele’s half-a-million vinyl order for ’30’ would really make much difference, Cohen replied: “Even if that one run has a big impact, I don’t think Adele is the force making that happen! Her record label, quite correctly, understand that although she probably makes quite a nice chunk of money from streaming, she’s going to make a lot more by selling vinyl. It’s the same calculation that the rest of us have made, but she’s just doing it better!”

He continued: “If Adele got paid more per stream, even though I’m sure she’s doing totally fine, I don’t think her label would care so much about the vinyl. I can see why people would blame Adele, she’s an easy target, but leave Adele alone. It’s not her fault. We’re all just trying to make money at the end of the day.”

On whether or not a solution to the issue was in sight, Cohen called for “a complete revolution in the ownership and distribution of the money accrued by the major tech platforms”.

“YouTube, Spotify and Apple are all swimming in it, so there must be money somewhere,” he said. “They’re all making money from content from other people’s concepts. That may sound ludicrous and radical, but I actually think that’s more realistic than building a bunch of vinyl plants.”

Lags Barnard (of Gallows and from Venn Records) also noted how “the indie scene operates at a much faster pace than bigger record companies” – which leads to the backlog having a direct impact on artists and music fans who are hungry for new releases.

“As a small label we’re used to getting releases out within a matter of months after signing a band,” said Barnard. “The current delay in production has forced us to stagger release dates between digital and physical, not to mention paying for vinyl that we can’t even begin to make our money back on for at least six months.”

Meanwhile, Jack Clothier from Alcopop! Records (home of  TIGERCUB, Art Brut, BO NINGEN, DZ Deathrays, False Advertising and many more) said that the production of vinyl is “rapidly becoming untenable, with almost all of our friends waiting at least nine months for their records now, making planning processes for album campaigns a real pain”.

“You could have a kid in that time,” said Clothier. “From monumental delays to rapid rising costs, the reasons for the nation’s shortage of the black stuff is complicated and multi-headed, but from anecdotal evidence, there’s some seriously key factors. First up, the emergence of vinyl into popular culture and the decision for big labels to come on board and press the stuff in droves.”

While saying that Adele’s team’s 500,000 order “sure doesn’t help those of us who are submitting our orders of 1000 for your favourite indie bands,” he went on to explain how there was much more of an issue from the shortage of supply and the general expense in getting vinyl orders made and shipped (which has only been worsened by Brexit).

“The real issue? The burning coals poured into your trembling hands, red raw from the caning the music industry has given you so far,” he continued. “Cashflow! Once a loving situation where you paid your bills 30 days after the vinyl had arrived and your records were already half sold, now you pay eight months in advance, before the campaign has even begun.

“PR, pluggers, MCPS, ads – they all want paying in advance, and the humble label is left spending hand over foot before you can even try to recoup your cash with some actual sales. Try running five or six album plots concurrently and see where that gets you. I can tell you from experience: it gets you stressed. Anyone fancy buying a CD?”

There have also been grumbles about labels distracting from the production of new releases by so many reissues being made and re-pressings of classic legacy albums. However, as Chris Marksberry (MD of worldwide vinyl manufacturing broker Sound Performance) explained, this only comes from the consumers’ hunger for vinyl – which has increased dramatically since the start of the pandemic.

“Vinyl was growing as a format generally, year on year,” Marksberry told NME. “It was all manageable and the factories were able to cope with the demand. Lead times were always longer than with CDs, but it was relatively normal business for everybody. Then around the start of the pandemic, people went into lockdown and couldn’t go to gigs or spend their money on other things, so they started purchasing vinyl online.

“It was February this year that we suddenly saw an exponential demand for vinyl ordering. It went from 10 to 100 per cent in the space of four to six weeks and it kept multiplying. Places that were ordering 2,000 last year were ordering 8,000 this year. Then the lead times at the factories starting increasing – it went from four weeks to six week to eight weeks to 16 weeks. Really, the demand just went through the roof in quite a short space of time.”

Marksberry added that the increase in demand for vinyl from the music-loving public now means that “the capacity has reached breaking point”, with many factories either unable to increase their capacity or unwilling to until they “know that this is a long term trend and not a bubble,” especially with increasing staff, component and material shortages.

“People are booking blocks of capacity because of the difficulty,” he said. “All the significant players from the majors to the independents are trying to reserve capacity so releases can be guaranteed. Having done that, you have factories effectively saying that they’re full for next year. That just means they’ve promised their capacity to their existing clients.

“You can still get records pressed for next year, but it’s probably going to take six to eight months from start to finish and the situation is likely to get worse before it gets better. It’s not like the industry is catching up, the demand is only ramping up.”

Quizzed if it was too over-simplistic to blame Adele and her album ’30’ for the crisis, Marksberry replied: “Oh blimey, absolutely! Everyone has large requirements for vinyl. Adele’s is probably the biggest order of the year, but there are plenty of big orders. The demand is everywhere, across every label, every artist.

“Even without Adele, the problem would still be there. As the demand becomes bigger, people order more so everybody’s initial order will be bigger than it would have been 12 months ago.”

He added: “Next year, we’re just going to see more of the same. You can already see that the problem will be there again, but perhaps more extreme.”

Last year saw vinyl sales hit their highest since the 1990s, having seen huge growth for the 13th year in a row. Figures revealed that nearly one in five (18 per cent) of all albums purchased across 2020 were vinyl, with 4.8 million LPs being purchased. The new numbers are 10 per cent up on 2019’s figures.

The post What’s causing the vinyl delay? “Adele is not the problem”, say music industry insiders appeared first on NME.