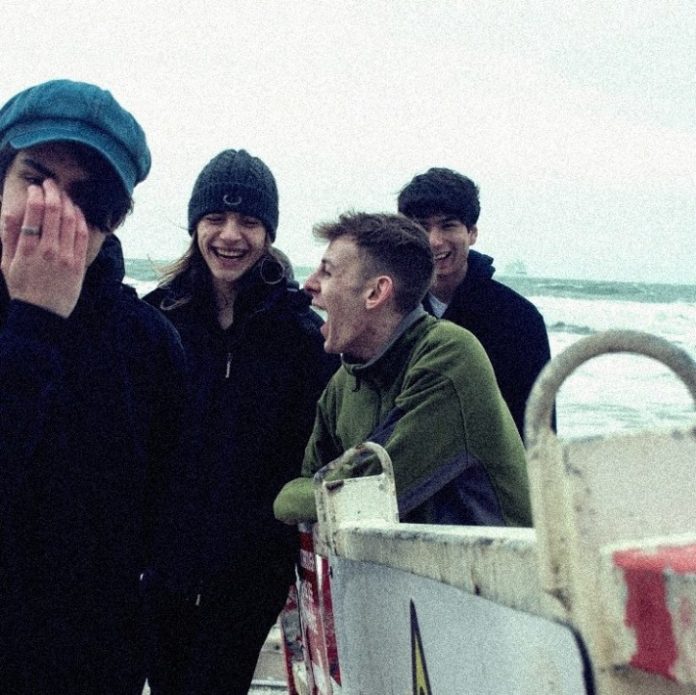 ‘Sit by the Sea’ is the first official release from Bournemouth indie rockers Wave Chase in over a year. The long-awaited return of their signature shimmering guitars and soppy singing couldn’t be timed better as sunny weather and eased lockdown optimism takes centre stage yet again.

When we last spoke to Wave Chase in late 2019 they were gigging regularly and preparing for the release of their debut EP Tell me What to Know. ‘Sit by the Sea’ started life as a demo from the same time, recorded on Garageband by frontman George Kingman. The band wasn’t able to meet up and record this version until Bonfire Night 2020, the day the country descended into its second national lockdown. This song is timely, as its lyrics repeatedly yearn for outdoor escapism, each verse made of couplets contrasting the freedom of the seaside with a failing relationship:

On the track’s BBC Introducing premiere last week George’s nasal vocals were compared to Circa Waves’ Kieran Shudall’s, but where ‘T-Shirt Weather’ is a nostalgic anthem for the past, ‘Sit by the Sea’ looks optimistically to the future, with George singing “I wanna talk about things to come” as he resents his time being wasted any longer by the subject of the song.

As Bournemouth natives, Wave Chase are certainly not strangers to the seaside. With half the band studying in Brighton at the moment, it’s no surprise that this particular brand of south coast surf rock comes so naturally to them. ‘Sit by the Sea’ was recorded a mile and a half from the beach at Brighton Electric Studios, overseen by YellowLace drummer Sam Ruthen who also grew up near Bournemouth.

While Wave Chase take inspiration from bands across the entire gamut of the British indie rock canon, ‘Sit by the Sea’ owes more to the sunny sounds of Brisbane, Australia. Upbeat and sparsely textured releases from the early to mid-2010s, (such as The Jungle Giants’ Learn to Exist and Bugs’ Growing Up ), clearly set the standard for bands like Wave Chase for what coastal rock music should sound like in the 21st century. Ever the nostalgists though, Wave Chase are sure to pay homage to the classic Californian surf rock sounds of the 60s, with a vintage combo organ making an appearance à la ‘Time Bomb’ by Avengers Six.

The track was mixed entirely using analogue gear by Joe Reeves, based in South London who has also worked with other Bournemouth bands including The Villanovas and San Marlo. It was mastered in Portland US by Timothy Stollenwerk (Surf Curse, The Dandy Warhols and Duncan Fellows) and the artwork was designed by Emily Welbers, a Dutch digital artist.

The boys are already billed for a hot summer of performances, including Portsmouth’s Golden Touch Festival. Catch Wave Chase on stages, streaming services and by the sea.

Listen to ‘Sit by the Sea‘ now