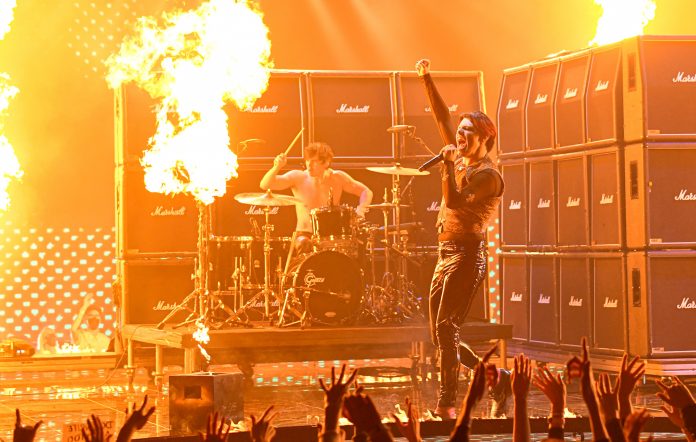 Yungblud was one of the musical performers at last night’s (November 14) MTV EMAs in Budapest – watch his incendiary performance of ‘Fleabag’ below.

At the event, hosted by Saweetie and dedicated to the LGBTQ+ community, Dominic Harrison also picked up the Best Alternative award.

In his speech when picking up the award, Yungblud said: “If you are out there and you feel you cannot be who you are – you can be. Keep fighting, keep being brilliant.”

For his ‘Fleabag’ performance, Yungblud played in front of a huge stack of amps while the stage was wreathed in flame.

The 2021 EMAs were being held to support the LGBTQ+ community, and organisers defended the decision to host them in Budapest despite recent anti-LGBTQ+ legislation being passed in Hungary.

The biggest winners of the night were BTS, with the K-pop group winning the Best Pop, Best Group, Best K-Pop and Biggest Fans awards.

Other winners on the night included Måneskin (Best Rock), Lil Nas X (Best Video for ‘Montero (Call Me by Your Name)’), Doja Cat and SZA (Best Collaboration for ‘Kiss Me More’), the night’s host, Saweetie (Best New), Taylor Swift (Best US Act) and Billie Eilish (Video For Good for ‘Your Power’).

Elsewhere, Yungblud is set to release his first short film – Mars is “an uncensored, unfiltered portrayal of youth” based upon the singer’s 2020 song of the same name.

The story for the film, which is a collaboration between Mercury Studios and Interscope Films, is based around Charlie Acaster, a young fan Yungblud met on tour who was struggling to convince her parents that she was transgender.