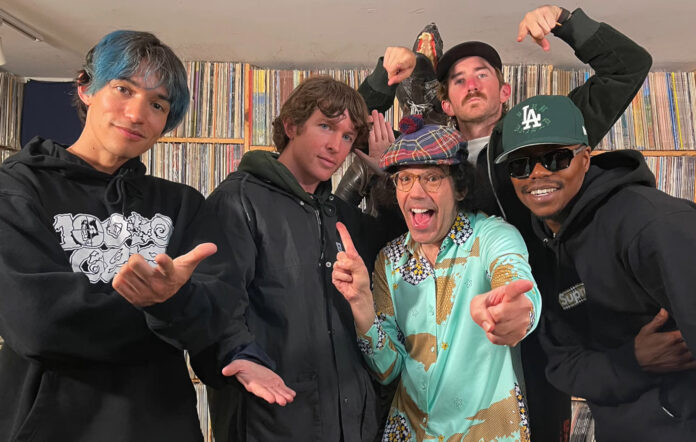 Turnstile are the latest guests on veteran Canadian interviewer Nardwuar’s YouTube channel, meeting the eccentric media personality while on tour in North America.

READ MORE: Turnstile live in London: an astonishing moment for one of the world’s best bands

The video, uploaded today (May 24), was shot primarily at Neptoon Records – a record store in Nardwuar’s hometown of Vancouver, British Colombia. The interview begins by Nardwuar and Turnstile frontman Brendan Yates exchanging framed photos of their initial encounter, which took place at South By South West in 2016.

From there, Nardwuar gives various gifts to each member of the band – as is tradition during his interviews. Bassist Franz Lyons is given a bobblehead of Bad Brains frontman HR, while Yates is given a vinyl copy of the soundtrack to the 1986 film Good to Go. The interview is interspersed with footage from the band’s recent show at Vancouver’s Rickshaw Theatre.

Watch the interview below:

Turnstile are currently on a North American tour in support of their third studio album, 2021’s ‘Glow On’. The tour has also brought them to late-night television, with a performance on Jimmy Kimmel Live back in March and an appearance on The Tonight Show Starring Jimmy Fallon set for later this evening. The band are also set to play a string of shows later this year in support of My Chemical Romance.

Away from Turnstile, Yates has also recently contributed to a new single, ‘Understand‘, by London-based producer Mall Grab – who has previously remixed three Turnstile songs.

Nardwuar, meanwhile, recently returned after several months with an extensive 45-minute interview with Tyler, The Creator. It marked the fifth time that Nardwuar has interviewed the rapper over the course of his career – with the last taking place in 2019.