HomeNewsWatch Toyah Willcox perform cover of The Rolling Stones’ ‘Sympathy For The...
News 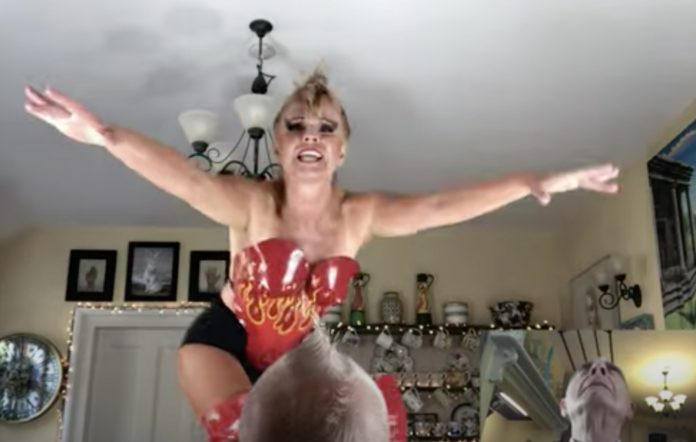 Toyah Willcox has performed a cover of The Rolling Stones‘ ‘Sympathy For The Devil’ for husband and King Crimson founder Robert Fripp – watch it below.

Last week, Willcox, standing on a kitchen table top, performed a version of The Velvet Underground’s ‘Venus In Furs’ as Fripp gazed up at her, chiming in with comments like: “Toyah will do almost anything to get out of cooking,” and “I wonder if we’re having dessert.”

For her rendition of ‘Sympathy For The Devil’ – the opening track on The Stones’ 1968 album ‘Beggars Banquet’ – Willcox, who once again delivers her performance whilst standing on her kitchen table, is seen wearing a flaming red, heart-shaped corset and knee high boots as Fripp looks up at her. She completes the look with face paint and a mohawk haircut.

“Robert is at home and he’s seated in the kitchen again, Toyah’s ditched the cooking and for Sunday Lunch well – its Toyah aboard the kitchen table!” Willcox captioned the new video. You can watch her latest cover below.

Willcox revealed in February that her Sunday Lockdown Lunch video series started because her husband, King Crimson‘s Robert Fripp, was having withdrawals from performing.

In August, Willcox released her 16th studio album ‘Posh Pop’, which she previewed with the single ‘Levitate’ featuring Simon Darlow and Bobby Willcox.

Discussing the album in a recent interview with NME, Willcox explained how it came about. “When COVID stopped everything last year, it allowed me to concentrate on writing and recording the next album,” she said. “We recorded in Simon’s outdoor studio with just him, my husband and I.

“‘Posh Pop’ was a magical experience created out of the need and ability to make contact with our fans in a heartfelt way. Also the terrifying distance between those who run the world and those on the ground inspired my writing.”

She added: “Working with Fripp in the studio, we just handed him the chord charts the day before and said: ‘We want you to come in and improvise and that’s what we’ll use’. It was spontaneous.”

Meanwhile, The Rolling Stones have discussed why they haven’t been playing their hit ‘Brown Sugar’ on their current US tour.

The band’s ‘No Filter’ tour kicked off in St Louis, Missouri on September 26, which the band dedicated to their late drummer Charlie Watts, who died at the age of 80 in August.

The post Watch Toyah Willcox perform cover of The Rolling Stones’ ‘Sympathy For The Devil’ appeared first on NME.