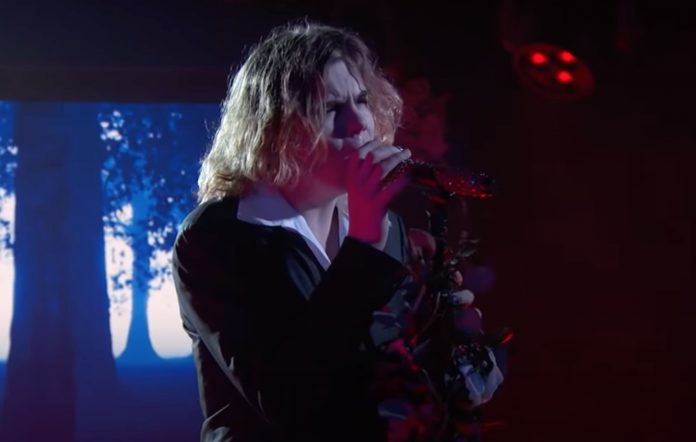 The Kid LAROI delivered a stripped-back rendition of his track ‘Stay’ during last night’s edition of Jimmy Kimmel Live – you can watch his performance below.

The song – which originally featured Justin Bieber – is taken from LAROI’s most recent mixtape ‘F*CK Love 3+: Over You’, which came out back in July 2021.

For his Kimmel appearance last night (October 29), the Australian singer and rapper, performing on a dimly lit stage, wore a blue suit and shirt with an oversized collar; he was accompanied by a pianist, whose instrument was decked out in flowers.

You can watch The Kid LAROI’s special rendition of ‘Stay’ below:

LAROI is currently working on his debut full-length album, expected for release in 2022. The rapper confirmed earlier this month that he also has several other projects in the pipeline, including one that will explore the origins behind his artist name, a nod to his mother’s Indigenous roots as a member of the Kamilaroi tribe.

Earlier this month, he teased a potential collaboration with Tame Impala, sharing two photos of himself in a recording studio with the psych-pop outfit’s frontman and primary songwriter, Kevin Parker.

Neither offered any context, but both photos show the pair sitting in front of a mixing console, with the first captioned with emojis for a pill, a police car, a couple and a glass of whiskey.

Meanwhile, The Kid LAROI has parted ways with Scooter Braun’s SB Projects after less than four months with the management company.

The rapper moved from previous representation A Grade Projects to Braun’s SB Projects in early June, a month before releasing hit single ‘Stay’ with Justin Bieber, who Braun has managed since early in the pop star’s career.

Billboard reports that the split was “amicable”, and that LAROI is now being represented by veteran artist manager Adam Leber, whose Rebel Management company also counts Lil Nas X and Labrinth among their current clients.