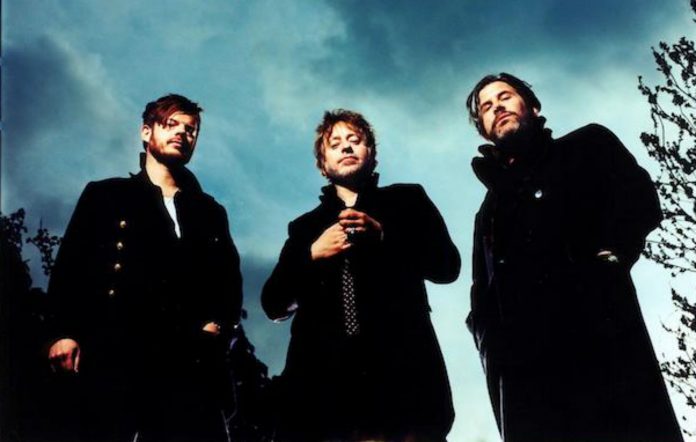 Loup GarouX have shared a visceral video for their new single, ‘Gallon Distemper’ – check it out first on NME below.

The supergroup features past Mercury nominee, producer and Libertines collaborator Ed Harcourt, Gorillaz and Senseless Things’ drummer Cass Browne and The Feeling bassist Richard Jones, who formed to create “a visceral and vivid sonic landscape” inspired by the likes of Queens Of The Stone Age and the sound of desert stoner rock.

All 12 tracks on the new album were written, recorded and self-produced by the band in The Wolf Cabin – Harcourt’s home studio – and mixed by Cenzo Townshend at Decoy Studios, with final mastering by Miles Showell at Abbey Road.

Speaking about the new record, Browne said: “I couldn’t really be happier with this record. Truly. It’s the strongest, most complete and accomplished record I’ve ever had the pleasure to make.

“The actual act of creating this was the easiest, most fun and made with such a sense of unbridled and joyous abandon I’ve had the pleasure to experience. For my part, I was experiencing a complete destruction and reform of one life, and entering a wild, new and beautiful one.

“… It was a completely cathartic release, in every sense of the word. As an inspirational process I wouldn’t recommend it to anyone. But I’m fucking glad there’s such a beautiful document left… This is the record I’m most proud of. To date.”

Richard Jones added: “Generally speaking, I pressed record while these guys tormented the fuck out of me…however – yes it was truly cathartic experience for me too. The music flowed out of us so naturally from the first time we played together as a band – it was definitely one of the most beautiful experiences of making a record I’ve had.”

Harcourt added: “Here be sinews and bones twisting and distorting into sonic soundscapes and jagged shapes, a juggernaut of heartbreak, death, redemption and fever dream anxieties, a lupine Frankenstein made from three like-minded veterans of music, coming together as one to soothe you, seduce you and perhaps destroy you.

“This is a unique recording that has been forged not only from the depths of Vulcan’s pit, but also during some kind of blackout in heaven. Well actually, it was made in the Wolf Cabin at the back of my garden… but the squalls of ear-wrenching madness amidst slow motion suspended moments of calm that only a truly decadent heart and mind could desire are all in there…

“I speak for Cass and Rich here when I say this record might just save your life.”

Loup GarouX’s special album launch show will take place at London’s Lexington on Monday (October 11), and you can buy tickets for the show here.

Last year the group made their inaugural live performances across the UK as support to Supergrass, which culminated in two dates at Alexandra Palace in March 2020.

The band are now in the process of finalising further dates to perform their new album live.