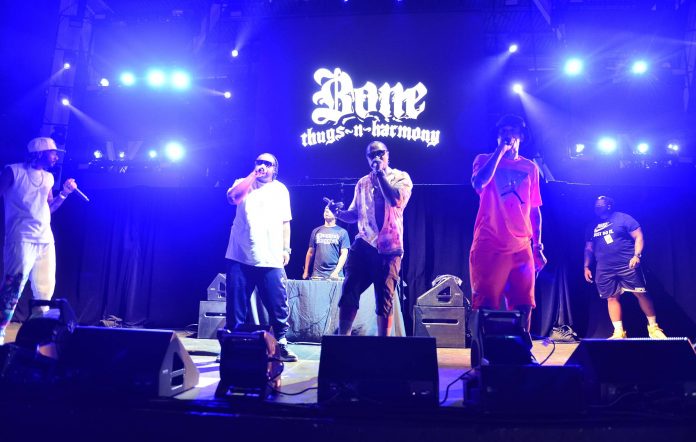 Bone Thugs-N-Harmony have been parodied in a sketch on the latest episode of Saturday Night Live, where they open up a pet store called Dog Bones-N-Melodies. Watch the video below.

They then sing bone-themed renditions of the group’s best known hits to highlight their various offerings, including dinosaur bones, vegan bones, fish bones that alley cats eat in cartoons and much more. Each purchase also includes a “free melodic serenade” from Bone Thugs-N-Harmony on the way out, which as one customer discovers, is not optional.

The SNL sketch follows the announcement that Three 6 Mafia and Bone Thugs-N-Harmony would be the next two acts to face off in the popular VERZUZ battle series.

The skit sees competitors take it in turns playing a song from a list of 20 from their discography, as fans, friends and fellow artists watch on. A winner is later decided by Timbaland and Swizz Beatz.

It’s official 12-2-21 @three6mafia going down @verzuztv Bone Thugs best there is, best there was, best there ever will be https://t.co/NXjpE2ijgl

Due to a feud between the two groups in the ’90s, there have been calls to get them to compete in a VERZUZ battle. An independent online battle was planned between the two last year, but according to Three 6 Mafia’s DJ Paul, the battle was pulled last minute after Swizz Beatz called him to tell him that VERZUZ wanted to host it.

The battle is set to take place on December 2 and will be hosted live at a yet to be determined Los Angeles venue.