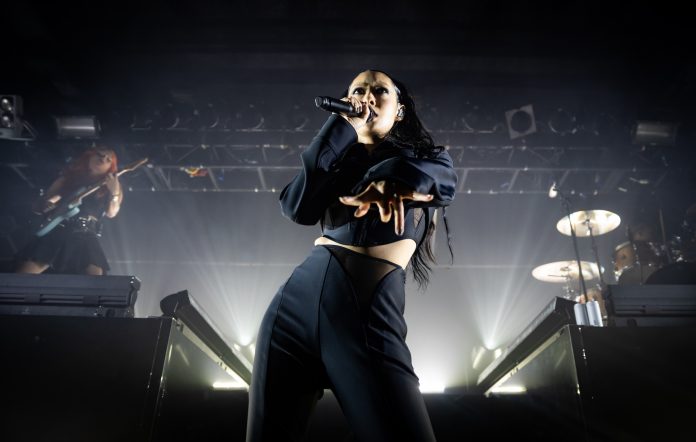 Rina Sawayama debuted a brand new song live last night (November 13) – watch her play ‘Catch Me In The Air’ at her Glasgow show below.

The singer is currently on a UK headline tour in support of 2020 debut album ‘SAWAYAMA’ and played the city’s SWG Galvaniser’s Yard last night.

During the set, Sawayama asked the crowd if they wanted to hear a new song, before launching into ‘Catch Me In The Air’.

“I wrote this song because, in these unprecedented times, I am touring my first record at the same time as finishing my second record,” she said ahead of playing the track. “I thought that the first record was really personal – and it was – but this new record is even more personal.

“This song, I wrote it about my mum, who is a single mum. You know how intense that relationship is – they feel like a sister or a brother.”

She added: “I felt throughout my life that my mum and I have caught each other when we’re falling.”

Watch the live debut of ‘Catch Me In The Air’, a soaring track with a classic rock feel and defined by Sawayama’s powerful vocals, below:

Back in September, Sawayama offered an update on her as-yet-untitled second studio album, slating a potential release window in 2022.

Replying to a fan on Twitter, who inquired as to the release date of the prospective LP, Sawayama succinctly replied: “Next year, late summer.”

Sawayama released her quasi-eponymous debut album, ‘Sawayama’, in April of 2020. In a five-star review, NME praised the album for establishing “a fresh sound drenched in familiarity.”

Reviewing the Manchester date of her current UK tour, NME wrote: “The meticulous choreography and altered arrangements of her songs result in a dazzling, all-encompassing pop assault on the senses, the sort which usually takes place on far larger stages than these; even bigger venues are already slated for this tour.”