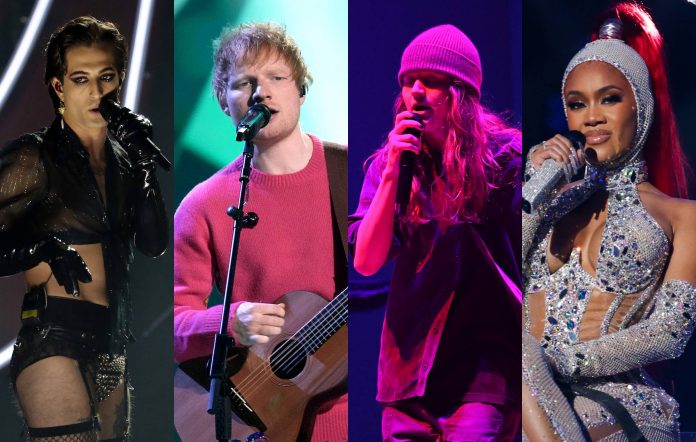 Måneskin, Ed Sheeran, Girl In Red and Saweetie were among the performers at last night’s (November 14) MTV EMAs in Budapest – watch the performances below.

At the event, hosted by Saweetie and dedicated to the LGBTQ+ community, BTS were the biggest winners, with the K-pop group winning the Best Pop, Best Group, Best K-Pop and Biggest Fans awards.

Fresh from a debut UK show and performance at Global Citizen Live, Måneskin brought their recent single ‘MAMMAMIA’ to the awards, performing a thunderous rendition of the track while a backdrop baring the song’s title hung above them after winning the Best Rock award.

Watch their performance below:

Also performing on the night was Ed Sheeran, who took home the Best Artist and Best Song (‘Bad Habits’) awards. For his performance, he played ‘Shivers’ and ‘Overpass Graffiti’, both from his recent album ‘=‘.

Watch his pair of performances, which saw him backed by a huge live band and backing singers, below:

Girl In Red was also in attendance at the 2021 MTV EMAs. For her performance of ‘Serotonin’, she performed inside of a makeshift house, while a host of dancers paced around her.

Check out her performance below:

Along with her hosting duties, Saweetie also performed at the ceremony, running through a medley featuring her tracks ‘Tap In’, ‘Best Friend’ and ‘Out Out’.

Check those out below:

Fresh from winning the Best Alternative award, Yungblud then took to the stage to perform an incendiary rendition of ‘Fleabag’, performed in front of a huge stack of amps while the stage was wreathed in flame.

In his speech when picking up his award, Yungblud said: “If you are out there and you feel you cannot be who you are – you can be. Keep fighting, keep being brilliant.”