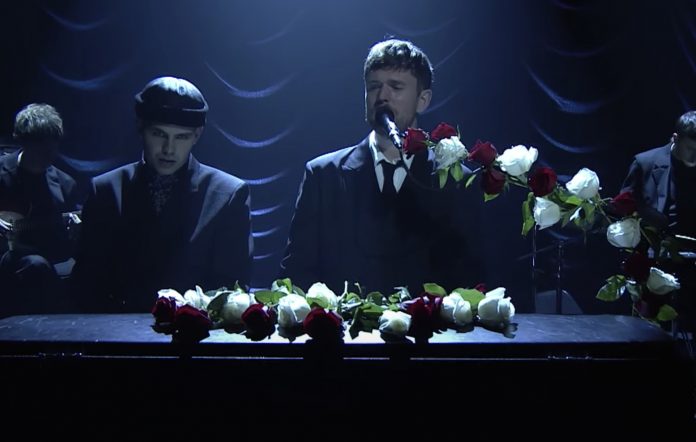 READ MORE: James Blake: “There’s always been more to me than sadness”

The original version of the song appears on Blake’s new album ‘Friends That Break Your Heart’, which was released last Friday (October 8). A new version featuring Slowthai arrived yesterday (October 11) with a new video.

The new version of ‘Funeral’ stays largely faithful to the original, with the sole addition being Slowthai’s pensively rapped second verse. On it, he spits: “I spread my wings, I got a nose bleed/ I been the dust on top of trophies, the rust that makes it homely/ The crust that no one wants, I was forgotten, I’ve gone mouldy.”

It marks the second time that Blake and Slowthai have joined forces, with the former appearing on Slowthai’s 2020 single ‘Feel Away’ (which also featured Mount Kimbie).

For their performance on Fallon, the pair, under dim lighting, sat behind Blake’s piano, which was made to look like a coffin, complete with a red and white flower arrangement. Blake and Slowthai were accompanied by a guitarist and a drummer, who played at the back of the sombre set.

You can watch the full performance below:

‘Friends That Break Your Heart’ marks Blake’s first full-length album since 2018’s ‘Assume Form’. The album – arriving after December’s ‘Covers’ EP – features appearances from the likes of SZA, JID and Joji, as well as production from Blake’s partner, Jameela Jamil.

Jamil recently spoke out against criticism she’d received after being credited on the album, calling her detractors “part of the problem of why women don’t pursue producing”.

Blake is set to take ‘Friends That Break Your Heart’ on the road next year, having recently announced a UK and European tour to kick off at the tail end of April. He’s also set to perform an “intimate solo piano show” in Kingston.