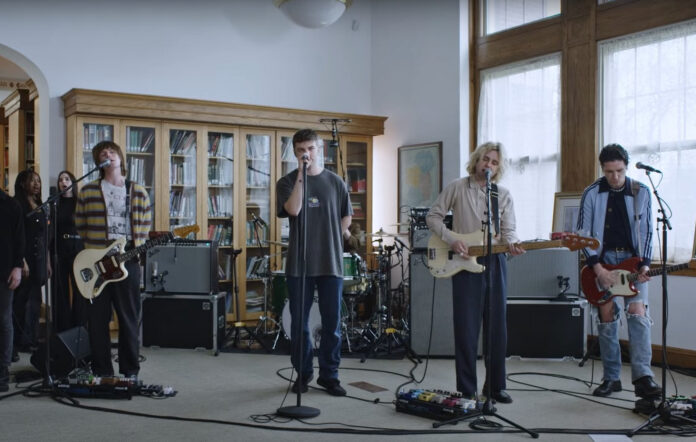 Fontaines D.C. have shared their NPR Tiny Desk Concert, filmed on their recent tour of North America and featuring renditions of songs from their latest album ‘Skinty Fia’.

READ MORE: Fontaines D.C.: “People are looking to me for answers. What the fuck do I know?”

The video, released yesterday (May 17), was filmed inside the Irish American Heritage Center in Chicago. The performance begins with frontman Grian Chatten sitting in-between two book shelves, playing the accordion and singing ‘The Couple Across The Way’. He is accompanied by cellist Maureen Dunne and viola player Isaac Henry for the song. Chatten then walks into the next room, where the rest of the band are set up.

They perform album opener ‘In ár gCroíthe go deo’, and are joined by members of University Chorale, a choir run from the Bienen School of Music at Chicago’s Northwestern University. Dunne and Henry return to accompany the band on ‘Big Shot’, before the band concludes the set with ‘Nabokov’. The power went out in the building during the final moments of the song, and this was captured on film by the NPR team as the band laughed.

The Tiny Desk Concert was one of several promotional performances the band did while in North America, including a set for CBS Saturday Morning and a full-power performance of ‘Nabokov’ on Late Night with Seth Meyers.

The band announced ‘Skinty Fia’ back in January, coinciding with the release of its lead single ‘Jackie Down The Line’. Several singles followed, including ‘I Love You’, the title track and ‘Roman Holiday’. The album topped both the UK and Irish album charts upon release, marking their first time reaching Number One on either.

In a five-star review, NME described the album as “a breathtaking collection that’s like nothing they’ve ever done before”.

“The fight for a better Ireland deserves songs that mirror the depth of the crisis, and in its endlessly captivating glory, ‘Skinty Fia’ rises triumphantly to the task,” it read.