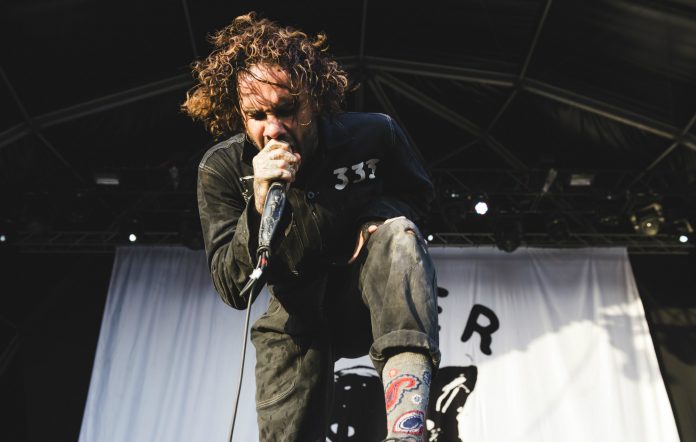 During the band’s set, vocalist Jason Aalon Butler made a death-defying leap from a video tower onto solid ground. Sharing the footage on Twitter, Butler captioned the clip: “I do my own stunts.”

Then, responding to a question from a fan that said: “Bro, how much anxiety does your mom get watching these videos? I fear for you and I’m only your friend!”, Butler admitted he gets a call from his mum every week about his onstage antics.

You can see Butler’s Knotfest stunt below:

I do my own stunts https://t.co/XwjPwuDFvJ

Before the show, which saw Fever 333 share the stage with Slipknot, Killswitch Engage and Code Orange, Butler took to Instagram to share another photo of him leaping from a great height into the crowd.

“I know it sounds mad corny, BUT these moments are as wildly freeing as they are “risky”,” said the accompanying caption.

“I think the difference in a moment like this and others where people take the leap of faith lies in the people ready to catch me. Y’all have created a community so damn strong with this Fever 333 vibe that I feel like I could leap from 3 stacked monitors on top of a high stage over a barrier and into your loving arms and be okay. Literally as you can see, but also metaphorically.

“Thank y’all for catching me and supporting me in these risks I take thus making me feel like anything is possible. I promise to return the favor in 2022.”

Speaking to NME last year, Butler revealed that he’s got a solo album ready to go alongside a couple of albums worth of material for Fever 333. “My reactive nature is probably going to be the common theme for everything I do, just releasing things when they make the most sense,” he said.

According to Butler, his solo material is “very hip-hop with these darker soul moments that is this whole other world that I come from and love. It’s still talking about politics but also it talks about my emotional relationship with politics and then how my relationship with activism has affected my romantic relationships.”

It was recently announced that Slipknot will be livestreaming the Los Angeles leg of their Knotfest roadshow, with tickets available now.

Taking place at the Banc Of California Stadium on November 5, it’ll be the biggest headline concert the band have ever played.