HomeNewsWatch Eddie Vedder cover The Police’s ‘Message In A Bottle’ with Stewart...
News 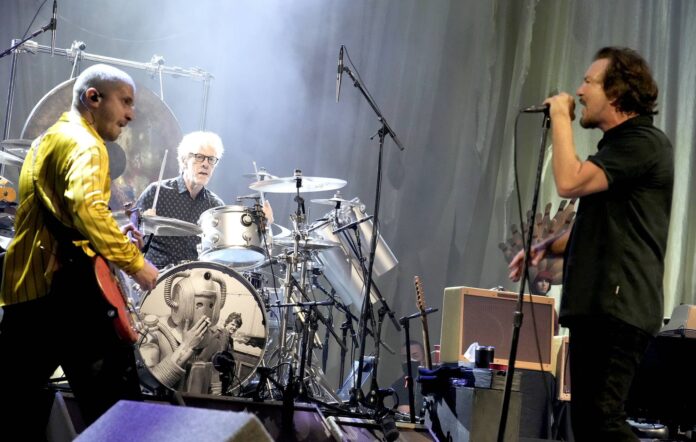 Eddie Vedder was joined by The Police drummer Stewart Copeland at a California show this weekend to perform ‘Message In A Bottle’ – check out footage below.

At Friday night’s (February 25) show at the YouTube Theater in Inglewood, California, Copeland joined the band on drums for an extended run through one of The Police’s biggest hits.

It also saw Chad Smith, usually drummer for the band as he is in Red Hot Chili Peppers, taking up guitar duties instead.

See footage of the performance below.

At an earlier show on the tour in Seattle, Vedder paid a moving tribute to the late Mark Lanegan following the grunge icon’s death.

The former Screaming Trees frontman passed away yesterday morning at his home in Killarney, Ireland.

There was an outpouring of grief from artists across the music world from the likes of Manic Street Preachers, The Charlatans frontman Tim Burgess, Anton Newcombe and many others.

Vedder, who was performing at the Benaroya Hall, paused his show to honour the late 57-year-old.

“I got here about four o’clock and all of a sudden my body started shaking a little bit,” he told the audience. “I started to feel really terrible and I think it was because I was having an allergic reaction to sadness.

“Because we lost… there’s a guy called Mark Lanegan. You know, there are a lot of really great musicians, some people know Seattle because of the musicians that have come out of the great Northwest. Some of those guys were one of a kind singers. Mark was certainly that and with such a strong voice.”

Reviewing Eddie Vedder’s ‘Earthling’ album, NME wrote: “Traversing musical styles, the record’s through-line is its allegiance to fatherhood itself; most of these tunes sound less like classic Vedder, and more like the music that raised him.”

The post Watch Eddie Vedder cover The Police’s ‘Message In A Bottle’ with Stewart Copeland appeared first on NME.