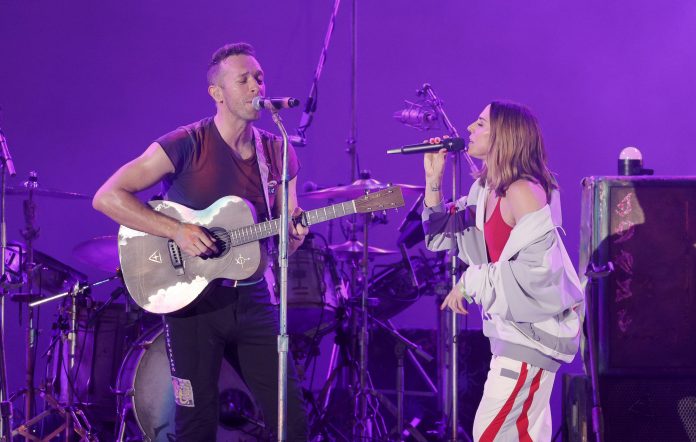 READ MORE: Coldplay: “This is our period of having no fear”

The band performed at Audacy’s We Can Survive show at the Hollywood Bowl on Saturday night, which was held in honour of National Breast Cancer Awareness Month in the US.

The sixth annual concert was held in collaboration with Young Survival Coalition and also featured appearances from the likes of Black Eyed Peas, Doja Cat, Shawn Mendes and The Kid Laroi.

Towards the end of the band’s set, Martin performed an acoustic cover of the 1996 track with member Mel C. Introduced the singer on stage, Martin said: “She arrived! Please welcome from England and Great Britain and the Spice Girls, Melanie Chisholm – aka Mel C, aka Sporty Spice, aka a total legend.

“Mel, thank you for coming. We asked you this morning and you’ve been amazing.”

The show also saw the British band play songs from their new album ‘Music Of The Spheres’, including ‘Human Heart’ with We Are KING. Martin also dedicated ‘Yellow’ to Riley Keough’s brother, Benjamin.

Keough shared fan-shot footage of Coldplay playing the song on her Instagram page earlier today (October 23). During the track, Martin said: “This is for our friend Benjamin, who’s… Benjamin’s gone. Wherever you are right now, we’re sending this song all the way to you.”

The actor captioned the post: “@coldplay dedicated Yellow to my brother tonight at @wecansurvivela […] I wasn’t ready for it but it was such a beautiful surprise. And me love you @dakotajohnson and credit and thank you to whoever captured this video.” Watch a clip of the performance above now.

Meanwhile, during a performance in Seattle last week (October 22), Coldplay covered Pearl Jam’s ‘Nothingman’. “So because we’re here in Seattle we wanted to pay tribute to all of the bands that we fell in love with when we were just young teenagers in the ‘90s,” Martin introduced the track.