HomeNewsWatch Billie Eilish perform ‘Happier Than Ever’ on a Hollywood rooftop for...
News 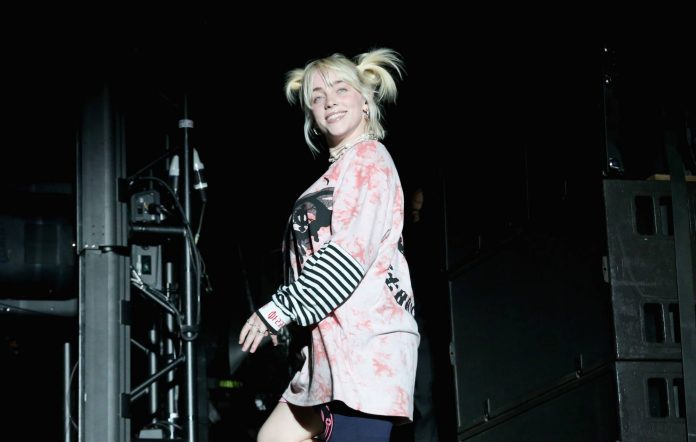 Billie Eilish performed her track ‘Happier Than Ever’ on the rooftop of the Hollywood Roosevelt Hotel for Jimmy Kimmel Live! last night (October 13) – you can watch her performance below.

The song is the title track from Eilish’s second studio album, which came out back in July.

READ MORE: Finneas: “I don’t know anything as strong as mine and Billie’s creative bond”

Eilish, her brother and regular collaborator Finneas and their live drummer played ‘Happier Than Ever’ on the rooftop of the Roosevelt, with the trio delivering a powerful rendition of the track.

You can watch Eilish’s performance of ‘Happier Than Ever’ below.

Elsewhere, Eilish took part in a skit with Kimmel where she crossed items off her bucket list.

The segment saw Eilish cut an audience member’s hair, be gifted a mouse and punch Kimmel in the stomach – you can see the clip below.

The singer recently expanded the Australian and New Zealand legs of her ‘Happier Than Ever’ world tour due to “overwhelming demand”.

Eilish will play in the UK in June 2022 – including six dates at London’s The O2 and her debut headline set at Glastonbury Festival – as part of the global tour.

Earlier this month Eilish celebrated after ‘No Time To Die’, her theme song for the latest James Bond film, went platinum in the UK.

“You can’t do a Bond song without it sounding like a Bond song,” the singer told the Bond film’s official podcast. “If you listen closely, you can hear [the classic Bond opening sting] in the second verse.

“It’s very subtle and it’s very echoed. We decided to do that, though.”

The post Watch Billie Eilish perform ‘Happier Than Ever’ on a Hollywood rooftop for ‘Jimmy Kimmel Live’ appeared first on NME.