HomeNewsWatch Big Sean and Hit-Boy toast to the good life in ‘Chaos’...
News 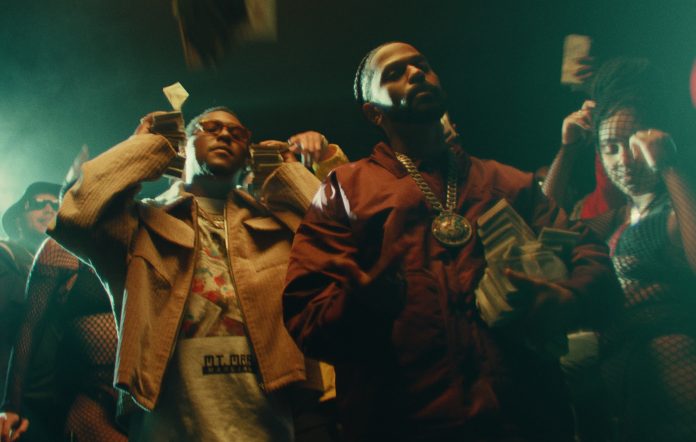 Big Sean and Hit-Boy have dropped a video for their latest collaborative track ‘Chaos’ – you can watch it below.

READ MORE: Big Sean: “God has taken away all these special people – there has to be a reason I’m still here”

The two artists released their surprise EP, ‘What You Expect’, last month (October 28), and have already shared visuals for the tracks ‘What A Life’, ‘The One’ and ‘Loyal To A Fault’, the latter of which features Bryson Tiller and Lil Durk.

In their latest clip, the pair toast to the good life and share what it took to get to this point in their careers, with archive footage of Sean playing on an old television set watched by a young boy. The video also includes a cameo from Nas, whose last two albums – ‘King’s Disease’ and ‘King’s Disease 2’ – were produced by Hit-Boy.

On the song’s chorus, Sean raps: “Starin’ at fate/ I’m in the lead and I’m breakin’ away/ If you not workin’, you takin’ up space/ I’m at the table, a thousand a plate/ How you gon’ tell me this isn’t a date?/ I’m down the street from the Denzel estate/ Right ’round the corner from Babyface/ Not my dawg Babyface Ray, I mean.”

The video was supposed to arrive yesterday night (November 11), but the wrong version was uploaded to YouTube; it was then swiftly taken down. Sean took to Twitter to explain: “Some mufucka uploaded the wrong version of the Chaos video! Bout to start uploading shit myself.”

You can watch the correct video for ‘Chaos’ below:

Meanwhile, Kanye West has said that the “worst thing” he ever did was sign Big Sean, explaining that he doesn’t “rock with” the Detroit rapper anymore.

At one point in the conversation, co-host N.O.R.E. asked Ye: “Pusha [T] or Big Sean?” which seemed to excite the rapper and producer, who started his reply by saying: “Oh, I love this!”

Before continuing, West got up, walked to the other side of the room and picked up an ‘R.I.P.’ headstone prop. “I already decided that when I die, on my tombstone it’s gonna say: ‘I deserve to be here because I signed Big Sean,’” he said.

Confused by his answer, N.O.R.E. said: “I’m not quite sure of your pick,” after which co-host DJ EFN interjected to say: “Big Sean, he’s saying. I think.” N.O.R.E. then asked for clarification.

“No, I’m saying that the worst thing I’ve ever done is sign Big Sean,” answered Ye. At this point, N.O.R.E. told everyone to clap because he misheard the answer, thinking he said “best”. When he learned what was actually said, the rapper turned host was shocked.

“Nah man, they let that – I know this man mama, bro,” said Ye. “You know what I’m saying? I changed this man family and both John Legend and Big Sean when I ran for office got used quick by the Democrats to combat they boy that actually changed they life.

He added: “That’s some sell-out shit and I don’t rock with neither of them and I need my apology. “N***as is scared.”

The post Watch Big Sean and Hit-Boy toast to the good life in ‘Chaos’ video appeared first on NME.