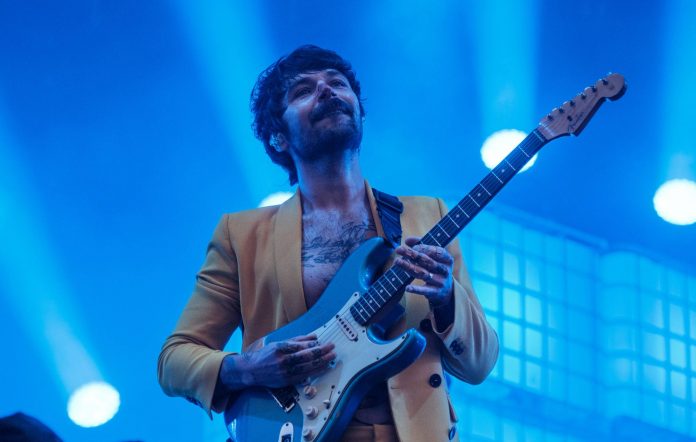 Biffy Clyro have played their new album in full on the opening night of their intimate UK tour – you can see footage from the gig below.

The group kicked off the tour at Liverpool University on Friday (October 29). Further dates include London, Cambridge, Sheffield and Southampton before the tour wraps up at Bristol O2 Academy on November 4.

The tour, which was set to take place in a number of venues that the group haven’t played “in over 10 years”, was first announced last year and was scheduled to kick off in April 2021 but it was then postponed until October due to the coronavirus pandemic.

When the dates were originally announced, Biffy were set to showcase songs last year’s ‘A Celebration of Endings’. But they were expected to debut tracks from follow up ‘The Myth Of The Happily Ever After’, which was released last week.

However, the group played the new album in full on opening night – see footage of the moment, images and a full set-list here:

Finally got my 30th birthday present, after many rescheduled dates and over a year later.
Biffy FUCKIN’ Clyro@BiffyClyro Biblical @ Liverpool 29.10.21 pic.twitter.com/zUux79GahZ

So much travelling but so worth it to see @BiffyClyro in Liverpool last night. TMOTHEA in full was unbelievable. @Vennart absolutely bossed Slurpy (and the rest!) pic.twitter.com/FrFnGZ7M3t

Speaking about the new album, the band recently told NME that COVID forced them to rewrite many of the songs they already had, creating a whole new beast. “The liberation of doing anything that you had any control over last year was a thrill in itself,” said frontman Simon Neil.

“We couldn’t leave the house, we couldn’t go shopping, no one could see anyone they cared about so the only freedom we had was in these ideas and these songs.”

The album was awarded four stars by NME and was described “as a happy accident”.

It added: “What started out as leftovers from the Scottish rockers’ last record has turned out to be, ironically, perhaps their most cohesive album to date.”

You can see the full set-list from the opening night of their tour below.

Encore:
‘Many of Horror’
‘Cop Syrup’