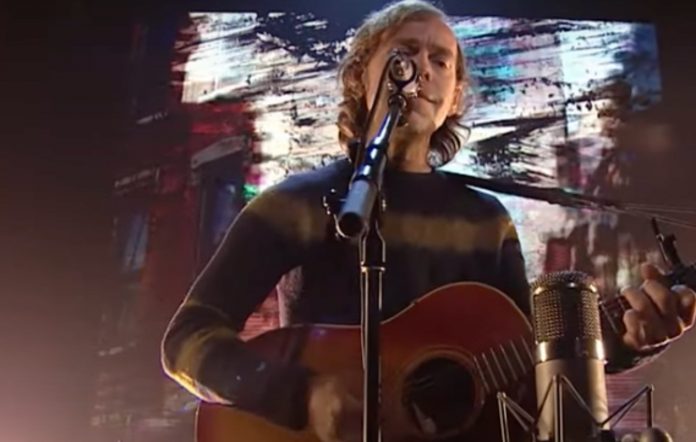 Aaron Dessner has performed Big Red Machine’s ‘The Ghost Of Cincinnati’ on The Tonight Show Starring Jimmy Fallon – watch it below.

It’s taken from Big Red Machine’s latest album, ‘How Long Do You Think It’s Gonna Last’, their second album together which was released at the end of August.

Reviewing the album, NME said: “The record covers the full range of human emotion and is huge in scope: from birth to death via love, friends, break-up, make-ups, what-could-have-beens and more.

“The epitome of the figurative “beating heart” that formed Big Red Machine, this is an autumnal album, one that lays the duo bare emotionally, and one that frequently calls for reflection.”

Aaron recently spoke to NME with his brother Bryce about creating the soundtrack to Cyrano together.

Ahead of the film’s release on December 31 in the US and in January in the UK, the Dessner brothers will release the Cyrano soundtrack on December 10 via Decca Records.

Speaking about creating the music for the film and what it involved, Aaron said: “We had a lot more control, and this part of the process we really enjoyed digging in deeper.”

Bryce added: “They’re National songs in a way, and have an interior, intimate feeling, and weave in and out of the narrative seamlessly.”

Aaron and Bryce Dessner’s ‘Cyrano’ OST, with lyrics from Matt Berninger and Carin Besser and contributions from the London Symphony Orchestra and Víkingur Ólafsson, will be released on December 10 via Decca Records.