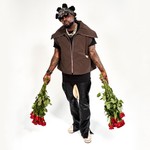 Since the November 2009 release of his debut studio album, Attention: Deficit, Wale has been a consistent Hot 100 presence, with 20 career songs on the chart, including “Lotus Flower Bomb” (which earned Wale his first Grammy nomination in 2013) and “Bad” featuring Tiara Thomas (which won the Soul Train Music Award for best hip-hop song of the year in 2013). Now, Wale is flexing his muscles as an actor: he co-stars in Ambulance, a new Michael Bay action film due out in February.

Plus, in partnership with Foot Locker and Footaction earlier this year, he released an exclusive apparel collection in connection with WrestleMania 37. Named “WaleMania,” each item was designed by Wale to honor iconic Black WWE champions.

That’s a lot for any artist to juggle — especially after being hospitalized and recovering from a severe case of COVID-19 and pneumonia. “I had to shut everything down for about a month,” Wale says of battling the virus. “I was in the hospital for a couple days, and then I was on bedrest. The album would have been out significantly earlier for sure. It was a lot, but I’m glad I made it out, and I’m excited to get back on the road and see my fans, hopefully early next year, because I appreciate everybody supporting the music.”

Folarin was a mixtape in 2012. Why did you switch formats and release Folarin II as an album in 2021?

It was a certain era in my career when part one was out, and I feel like this is the closing chapter to that era. I’m paying homage to that and we’ll be going to a new chapter after this one. This one has mixtape energy and the samples of songs you’re very familiar with. It’s essentially made in the spirit of a mixtape for my day-one fans.  Some people love mixtapes more than the album, but it’s one and the same.

Speaking of samples, why did you include so much nostalgia on this project?

It’s sprinkled with my influences — the heavy-handed ones that are more obvious, that you know with the first listen, and songs I really like. It’s a very laid-back project. I have this song called “Caramel” which samples Faith Evans, and it’s like I’m rapping on the original beat of the song.

You’re essentially the first mainstream Nigerian rapper in the U.S., and in your song “Down South,” you speak Yoruba, saying the phrase “Amin Jesu” [which means amen in Jesus name]. Do you consider yourself the Nigerian O.G.?

You’re the first person to notice that line. I do, but I think it gets buried in the history books. Some people don’t realize that. It was a big deal when I started, I remember my first time on the road meeting Nigerians from all over the country.

What was it like for you pushing the envelope for the culture in 2009? Nigerian parents primarily push for careers in medicine, law and engineering — did you have your family’s support?

Medicine, law and engineering, that’s it. But I didn’t, I’m not gonna lie. [laughs] I was in trouble a lot, and I was in school at Bowie State University until I dropped out around my “juniorish” hybrid year. I majored in communications, the generic “I don’t know what I wanna do with my life.” I had to show them that [my music career] was already in motion. I already had record deals offered to me while I was in school. I didn’t have to leave, I just stopped and went straight to Roc Nation and was on the road immediately. I put in a lot of work recording and getting myself hot in D.C. first and I had opportunities.

There’s a new breed and I would assume the younger generation of Nigerians [has more freedom of expression]. There’s so many Nigerians in the NBA and NFL now, so many actors, YouTubers and all that. I would assume this generation isn’t gonna have to deal with that. But you know, it’s about those bragging rights to their friends. That’s why Nigerians are big on weddings and graduations.

What’s the importance of paying homage to your Yoruba culture and your mom specifically with this album?

I think it’s important for the younger generation to know that I will always have pride in my culture. The good, the bad and the ugly makes us who we are. I take a lot of pride when I see successful Nigerians and kids in the diaspora because a lot of us had difficult upbringings or pressure to be perfect for our parents.

They’ve been calling me Folarin since I was early in the game, and we ran with it. I’m still amazed sometimes when people say they didn’t know I was Nigerian — it catches me off-guard still to this day.

In your own words, what makes you one of the greatest of all time?

How many times I’ve rapped successful songs in different eras. Different trends might be going on in music, but I still stick with my own thing continuously. That’s one thing I’m very, very proud of, and I think that’s what greatness is. I put my all into it.

Folarin II is released by Maybach Music Group and Warner. What’s it like working with Rick Ross after all these years?

Ross is one of my biggest influences. His work ethic is unmatched. He’s like my oga [“boss” in Yoruba]. I look at him like one of my uncles or elders. He set the tone and gave me a lot of game. He didn’t have to take a chance on me or Meek [Mill] at the time he did. He changed our lives.

Did anything crazy happen in the studio with Rick Ross?

Not this album, because everything was pretty locked down, but one time the sensory light didn’t work, it was pitch black and I fell into a pool. [laughs] All my clothes were wet and they gave me merch to wear and we laughed for a couple hours. That was the greatest thing that ever happened to me in the studio.

Ambition, your second studio album and first project released by MMG, turns 10 on Nov. 1 – do you have special memories from creating it?

I learned the art of songwriting during that album. I literally remember when I was like, “Wow, I’m really, really understanding how to write songs better now.”

You released Ambition with MMG after dropping your debut album, Attention: Deficit, with Interscope. How do you feel switching labels has impacted your career?

Them giving me the platform enabled me to reach more people and learn from one of the best rappers and businessmen. I’m blessed. I learned a lot of game from Ross since I’ve been there.

[laughs] People lying about their deadlines. People will be like, “I gotta get this feature done tomorrow, man. It’s the last day.” But it’s not really. So I’m sitting there stopping myself and my sessions to do your feature and the joint doesn’t come out for another five months. I hate when people do that.

You once tweeted that your career was defined by your mistakes. How have you worked through that?

You appear in an upcoming film Ambulance. What can you share about your role?

I play a degenerate gambler [laughs] who’s caught in a bad way. It’s a thriller. I had fun working with Michael Bay, Yahya [Abdul-Mateen] and all of them.

Lastly, now that the younger Nigerian generation has entered the Hot 100 with Afrobeats, what do you think is the next big thing for Nigerian artists to tackle?

I think this is just the beginning. There will be more and more big pop stars collaborating with Afrobeats artists. I think it’s just getting started.