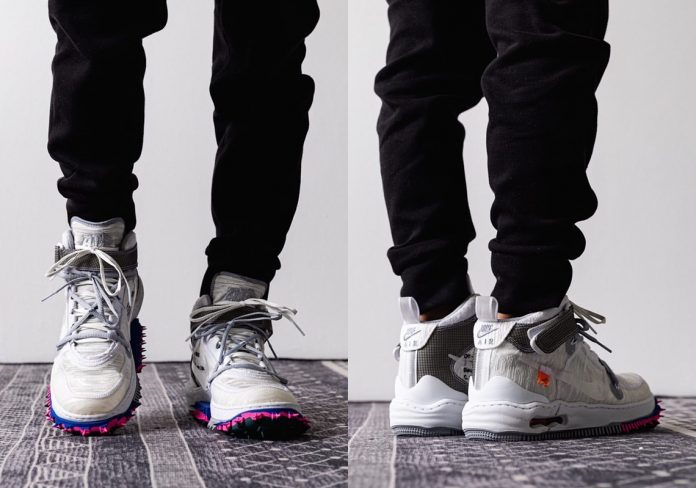 Almost five years removed from his debut “The Ten” collection, Virgil Abloh continues to make headlines by reimagining classic silhouettes from NIKE, Inc. with some of his signature design cues. Up next?: The Nike Air Force 1 Mid in white.

Set to launch alongside a black colorway, the newly-surfaced pair has already drawn criticism on social media for its jarring modifications — not to mention the trim’s general disapproval. Knit detailing appears all-throughout the partly transparent, synthetic upper; lockdown straps around the ankle make an appearance in greyscale, as does the additional set of laces running from quarter-panel to just by the top-most eye-stays. Now-signature Off-White Helvetica text lands in the medial side, while mismatched tabs accompany each profile swoosh.

Underfoot, Abloh applies the boldest modification to Bruce Kilgore’s iconic Air Force 1: Midsoles are coupled with a new support structure at the heel while they boast an imperfect, wavy layout. A visibility window is created for the previously-enclosed Air unit, furthering along Abloh’s penchant to bring the hidden to the forefront. Akin to the Off-White x Nike Waffle Racer, the upcoming sneakers feature spiked tread throughout the outsole. Furthermore, this new detailing introduces hits of rich blue, pink and green into the mix, which further prompt spectators to wonder about Abloh’s design choices.

Continue ahead for more images of the pair, and anticipate a Nike SNKRS launch in 2022.

For more from the North American conglomerate, check out the Rui Hachimura Jordan 8.