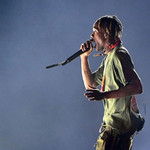 There was no other way to end an insane weekend full of music, mosh pits, surprise moments and more than having the king of Rolling Loud, Travis Scott, close out day three on Saturday (Oct. 30) at Citi Field in Queen, New York. The last time LaFlame hit the Rolling Loud stage in the Big Apple, he blew out his knee and finished the show on one leg in 2019. It was a courageous effort, but Scott knew he needed to redeem himself and run that one back.

At around 9 p.m., a video began playing at the DeLeon stage, showing an animated Scott seemingly asleep with all sorts of tubes sticking out of him. The camera zoomed into his eyes before a giant curtain fell, revealing the Houston rapper standing on top of an elevated platform and going right into the unreleased “Escape Plan.”

Scott ran through a medley of hits that took Rolling Loud to the Rodeo and through Astroworld with songs such as “Mamacita,” “Butterfly Effect,” “Stargazing,” “90210” and more. Fans could barely keep their excitement in check as Scott began to rage — and he wasn’t going to let a single body be unmoved by his infectious energy. At one point, the rapper saw two festival-goers having a hard time with security in the front row and allowed them to get on stage.

With the situation in the crowd getting aggressive, Scott reminded security the kids are here for one thing only, and that’s to rage. He would make sure that would happen, too, as the haunting introduction for Owl Pharaoh standout “Upper Echelon” crept through the speakers at DeLeon. Without a word, Travis instructed the two fans to stage dive into the audience, and once they did, 80,000-plus people roared with approval.

Scott previewed another unreleased track off Utopia, which had the Rolling Loud faithful begging the 30-year-old hip-hop artist to drop the highly-anticipated album. Despite still waiting, Travis’ Rolling Loud set gave fans a satisfying preview of the energy he’s embracing on the new album.

Rolling Loud day three ended with Cactus Jack sending fans home with an intense fireworks display to Scott’s biggest hits, “SICKO MODE” and “Goosebumps.” A night full of raging turned into one of redemption for Scott, who took in all the love he was getting from the crowd on Saturday night.

Other highlights from Saturday’s finale include Griselda Records shutting down the Audiomack stage with an impressive display of lyricism and Roddy Ricch claiming he’s done with Rolling Loud. Westside Gunn, Conway the Machine, Benny the Butcher and Armani Caesar brought a taste of the gritty Buffalo streets to Citi Field as each rapper destroyed their performance with their respective hits.

Roddy Ricch, on the other hand, was not happy with festival organizers cutting his microphone off at the end of his set. The West Coast rapper attempted to give fans a booming rendition of his smash hit “The Box,” but the audio cut off, causing fans to cheer on Roddy’s name. He returned to perform the song but notified the crowd that this might be his last Rolling Loud after organizers sabotaged his set.

Rolling Loud returned to the city that never sleeps to give fans another great weekend full of moments they’ll be holding on to until the next time hip-hop’s biggest festival touches down in Citi Field in 2022. Up next is Rolling Loud California, which will be taking place December 10-13 at the National Orange Show Event Center in San Bernardino.

Kid Cudi, J. Cole and Future will be closing out the three nights with other performances by Playboi Carti, Wiz Khalifa, Don Toliver, Young Thug and more throughout the weekend.