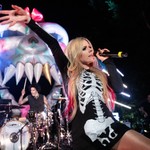 Travis Barker didn’t miss a single a detail when putting together his Halloween costume for his House of Horrors concert special, which airs on digital platform NoCap this weekend. From the snug tight leather jacket to the chain and lock necklace and spiked black hair, Barker’s take on the late Sex Pistols guitarist Sid Vicious was absolutely perfect, down to the “Im A Mess” button on his coat.

The look was just one of a half-dozen worn by the longtime Blink-182 drummer and acclaimed collaborative musician and manager for the innovative pay-per-view Halloween concert, shot days earlier at a reimagined haunted house outside of Los Angeles with a guest list including Kourtney Kardashian, Gabrielle Sidibe, Siickbrain, Mod Sun, Phem, Royal and The Serpent and Theotis Beasley. Mixing live interviews from the “Queen of Rock” Allison Hagendorf and thrilling concerts, House of Horrors features a number of exciting collaborations between Barker and headliners Machine Gun Kelly, Avril Lavigne and former Blink-182 bandmate Mark Hoppus.

The performances are heavy on nostalgia and production, moving throughout the haunted house set with beautifully shot and mixed musical vignettes of popular tracks like Blink-182’s “Rock Show” and “What’s My Age Again?” Barker played drums for every track, creating a fast-paced and fearless blitz through pop-punk classics, beginning with sets from newcomers like Jasiah, JXDN and Iann Dior, and wrapping with a mind-melting effort from Machine Gun Kelly.

“Cisco and I were talking and we had this idea to do a friends and family show,” Barkers said of his partner and collaborator Cisco Adler. Adler is the co-founder of NoCap, co-owner of L.A.’s Roxy Theatre and a Grammy-nominated musician and producer. “This is the concert we all WISH we could go to.”

Over two hours of music, House of Horrors delivers an incredible slate of performances — Lavigne stuns during her set, nailing classics like “Sk8ter Boi” and “Hey You” while Barker goes full Squid Game mode for his performance of “imu” with Blackbear.

Designed with music and live performance in mind, House of Horrors is one of the most innovative concert concepts to air since the explosion of live-streaming in the early days of the pandemic and shines with its sweeping shots, rich artist portraits and sound design optimized for an at home audience.

House of Horrors airs through the weekend at nocapshows.com. Tickets start at $25.