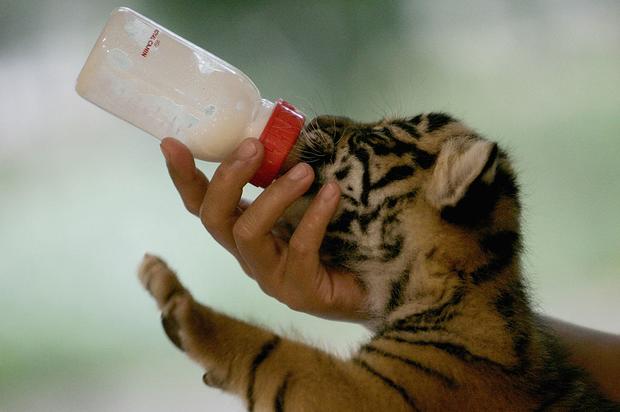 It’s been a tough week for 30-year-old Oak Cliff rapper Trapboy Freddy. Not only was he arrested on Wednesday (August 17) on weapons charges, but he also lost custody of his pet tiger cub, who was seized when authorities raided his Red Bird home.

As The Dallas Morning News reports, around 2 PM on the day of the arrest, officers were dispatched to the 2700 block of Meadow Gate Lane to aid U.S. marshals in serving Devarius Dontez Moore with a federal warrant.

A spokeswoman for the U.S. attorney’s office, Erin Dooley, told the outlet that the rapper is facing a charge of possession of a firearm by a convicted felon. As of Thursday (August 18), it remained unclear if Moore remains in custody, or if he has an attorney.

At the time of the arrest, Dallas Animal Services was called to secure a tiger, with the agency noting that the animal is being held in protective custody “at an undisclosed location.”

Social media users have been responding to news of the cub being taken away, tweeting things like “Free Trapboy Freddy’s tiger, he ain’t do nothing!!!” The Dallas Zoo also took the opportunity to assure locals that the animal was not one of their own, writing, “Our tigers are all accounted for and safe here at the zoo.”

As recently as June, Freddy was flexing his cute pet for his Instagram followers, despite the fact that keeping a tiger as a pet is prohibited in the city of Dallas. At this time, it’s unknown if the rapper will face charges related to the animal.

What we do know, though, is that he accused the local police department of using excessive force against him during a 2018 arrest in Oak Cliff. He also previously pleaded guilty to gun and drug possession in Dallas County and has pending cases in Kaufman County on charges of unlawful possession of a firearm by a felon and marijuana possession.

Tap back in with HNHH later for more hip-hop news updates.

Share
Facebook
Twitter
Pinterest
WhatsApp
Previous articleJermaine Dupri Responds To Claims That He Stole Beats In The 90’s: “Get The F*** Outta Here With That”
Next articleTevin Campbell Confirms He’s Gay, Explains Why He Didn’t Come Out Earlier