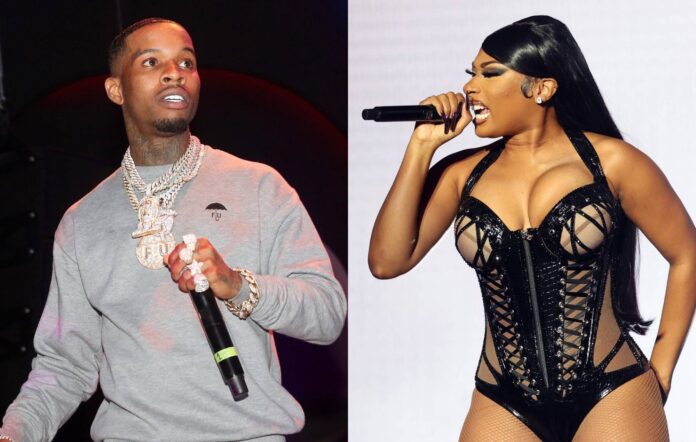 Tory Lanez has been hit with a third charge ahead of his trial over an allegation that he shot Megan Thee Stallion in 2020.

The rapper (real name Daystar Peterson) is accused of shooting Megan Peet in the foot in July of that year during a drunken dispute that unravelled following a pool party at reality star Kylie Jenner’s house in California.

Lanez was released earlier this week (December 5) from house arrest at a judge’s discretion in order to prepare for the trial. He currently faces two charges – one count of assaulting Peet with a semiautomatic firearm and one count of carrying a concealed, loaded, and unregistered firearm in a vehicle. Lanez has pleaded not guilty to the the charges.

Prosecutors have now added a third charge of discharging a firearm with gross negligence, which carries a possible six year sentence according to Rolling Stone. Lanez or his lawyers are yet to comment on the latest charge.

If convicted on all counts, Lanez will still face the maximum penalty of 22 years and eight months as the new charge relates to the same alleged conduct, so any related sentence would run concurrently.

Earlier this week, Lanez was freed from house arrest; which he’d been placed under following allegations that he assaulted musician August Alsina in Chicago in September, as the jury selection opened. The rapper has denied assaulting Alsina.

Opening statements in his current case with Megan The Stallion are due to begin next Monday (December 12).

A protective order bars Peterson from contacting Peet in person or otherwise.

Last month, Megan Thee Stallion responded to a lyric on Drake and 21 Savage’s new collaborative album ‘Her Loss’ that appeared to reference her being shot.

She posted a series of tweets demanding unnamed rappers stop referencing her shooting, beginning by demanding that they “stop attaching weak ass conspiracy theories in bars to my name”.

In a separate tweet, she wrote: “Stop using my shooting for clout… Since when tf is it cool to joke abt women getting shot!”